↑
You are here: Home / A Green Home / A Clean Breeze with More House Plants 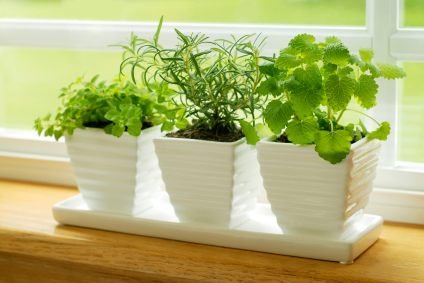 Did you ever consider how much time we spend indoors daily? It’s shocking if we add up the minutes and hours compared to just being out in the world.

That’s why indoor air is something we shouldn’t take for granted, especially when low quality air can create unhealthy side effects for the whole family. In fact, poor indoor air caused by various factors including mold, mildew, and fumes from paint, heating systems, or other chemicals are catalysts for allergies that contribute to one of the leading causes of asthma.

In order to prevent this and make our living spaces healthier environments regular cleaning and testing for lethal fumes is essential.

However, one way we may actually purify the air by doing very little is through adding plants to our homes.

Just over twenty years ago a study to find ways of purifying space station air was carried out by NASA and the Associated Landscape Contractors of America (ALCA). It discovered that certain kinds of regular household plants were able to remove toxins in the air released by formaldehyde , benzene, and trichloroethylene, three well-known chemicals used in the building industry.

Some of the plant species said to make a difference include:

Although the experiments were carried out in space and their findings suggest they should be working similar processes here on Earth a lack of further scientific evidence has kept officials at some leading health and safety organizations from endorsing the data.

Nevertheless, the correlation was made.

Furthermore, since it’s already been proven that plants do good things for the world such as converting carbon dioxide into oxygen having a few extra common household plants in the dining room and kitchen can’t hurt, especially if they may be cleaning the air.

Finally, if you’re worried about how to manage another chore realize most house plants are inexpensive and require little sun light and minimal water, which means modest attention. If you’re still concerned about a possible burden consider getting the kids involved as it’s a great opportunity to teach about the process going on around them; that plants may be filtering out harmful particles in the air.

It will give them a sense of responsibility while educating about the environment and how plants are more than producers of food and other raw materials but can directly affect humanity’s well being with every breathe.

Jakob Barry writes for Networx.com, a growing community of users sharing and monitoring home improvement projects allowing homeowners and contractors to get the most from their resources. He covers various home improvement topics, including green landscaping and general house cleaning .