↑
You are here: Home / Healthy Eating / Paula Deen Confirms Type 2 Diabetes – What Is to Blame? 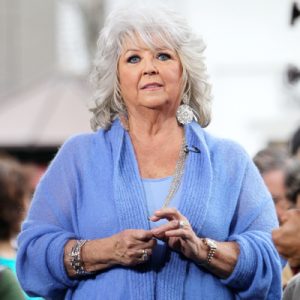 Over the weekend rumors were flying that Paula Deen was going to announce that she has developed Type 2 Diabetes. This is such a hot issue because in recent years she has been called out in the media, and by fellow Food Network chefs, for her food being so unhealthy. Today she did in fact confirm that she developed diabetes three years ago. The delay in the announcement seems clearly, to me at least, an attempt to buy time and figure out how to spin this and profit from it. In addition to becoming a pharmaceutical company spokesperson she is also starting a new diabetes management program called ‘Diabetes in a New Light’ which appears closely linked to the aforementioned pharma company.

I have limited knowledge of Paula Deen myself. I did not watch her show (though I may have seen bits of an episode or two) and I don’t want to bash her or bash her food. That is not the intent of this post. What irritates me about this whole thing is that the first thing people say when they hear about this is… “Well, just look at all the fat in her recipes!” They talk about her fried foods and her love of butter. They talk about all the bacon she used in her recipes. They talk about how she needs to go vegan and get rid of all that fat. Huh????

Color me confused but what in the heck does fat have to do with this issue. Nothing. Why does everyone bring up the fat content of her meals? It was not the fat that made her diabetic. It was all the sugar and other foods that turn into sugar and cause insulin spikes and blood sugar imbalance, the carbs. It was not the butter, it was the bread, pasta, grains, baked goods, and sugar. It wasn’t the egg, or the patty, or the bacon in her Lady’s Brunch Burger… it was the glazed doughnut that sandwiched these things. 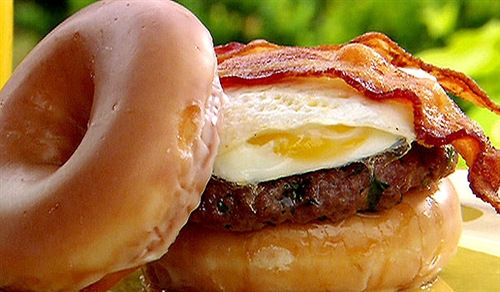 Perhaps Ms. Deen DID go overboard with fats in her recipes. I don’t dispute that. I highly doubt she much considered the quality of her fats either. But I do not think that fats make you fat and lots of current research supports this. Watch the movie Fat Head for a crash course. The book Wheat Belly also addresses this at length. It is too many calories and all the carbs… grains, pancakes, pasta, doughnuts, bread, oatmeal, etc that causes obesity. The insulin causes our body to store fat and send messages to our brain to keep eating carbs, even though technically we have eaten enough calories. Fat satiates us and makes us feel full. Carbs make us hungry again an hour after we eat a big meal. The insulin spikes from the constant carb load eventually cause insulin resistance. Our body is worn out from years of abuse and we develop type 2 diabetes and it wasn’t from eating fat. If you put two sticks of butter in your mac and cheese that didn’t help matters. Yet it was the pasta next to all that cheese and butter that caused your body to store that fat instead of burn it and make you ready for seconds before the first plate even digested.

It bothers me to see bloggers and other media folks harping on the fat while they give a free pass to the real culprits… the grains and carbs. Obesity is blamed when obesity is simply the symptom. Sadly when Paula Deen’s recipes are revamped for “healthier” eating they will likely become low fat whilst remaining high carb. A diet like that almost ensures that a diabetic will need to take insulin for management and intertwine their future with a pharma company who is motivated by profit and has no desire to help you achieve actual health.

Sadly I see the wrong foods being blamed here and the “cure” isn’t going to do anything but ensure you become and remain, a pharma customer. Why isn’t anyone talking about that?