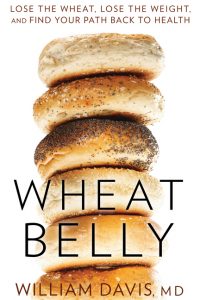 I recently spent a few days at my parents’ house a couple counties away. I always bring a few books with me and enjoy the unplugged time and this particular visit was no exception. Almost as soon as I walked in the door I plopped down on a recliner and pulled out a book I was excited to read, Wheat Belly by William Davis, MD. It was the second book I read in a week that dealt with the issue of eschewing grains from the diet (more on the other book later).

For the new year I decided to make some diet changes. I would consider myself a pretty healthy person who eats a healthy, balanced diet. The nourishing vegetarian, high raw diet I have “mostly” followed since my cancer diagnosis in 2006 has brought me back to health and vitality and yet there are some nagging health issues that have not been cleared up. My thyroid issue, which I am certain was caused by the soy I didn’t even know I was eating, is not reversing itself. I have had trouble getting to sleep and staying asleep for several years now. I think I have a few too many aches and pains for a 34 year old woman to have. As healthy as I may think my diet is, something has to be missing, right? The answer seems to be lurking in the dietary realms in which I did not want to go. Time to man up, or woman up, and go there for 2012.

One major change is that I am going grain free this year. No more wheat for me. I am also adding to my “NO” list rice, legumes, lentils, potatoes, corn, and quinoa. All of these things have either gluten-like components that cause digestive issues and immunity issues or they cause blood sugar spikes which can lead to insulin resistance. After reading Wheat Belly I am more and more convinced that this is the right thing to do. Despite the fact that I already limit grains and/or soak and ferment them, I know that they actually have no place in my diet at all and there is no time like the present to bite the bullet.

The book is essentially about modern wheat’s assault on our health. It follows the evolution of wheat, starting with its much milder, ancestors einkorn and emmer to the drastically hybridized and genetically modified wheat we have today. The early versions of wheat would not be suitable for things like bread and doughnuts; it was more suitable for porridge. It was also not suitable to be grown on a very large scale. Hence human involvement to adapt and change wheat so that it was everything we wanted it to be. Everything except safe for consumption ironically. No studies or tests were done to determine if all these changes we have made to wheat were safe and many scientists, including the doctor who wrote this book, think it is one of the most devastating foods to human health there is. It is a major factor behind obesity, diabetes, intestinal issues, Celiac Disease, compromised bones, heart disease, skin conditions, hair loss, and inflammation like rheumatoid arthritis. The book also explains how wheat is an addictive substance. There are numerous stories about how his patients reversed some very serious health conditions simply by kicking wheat to the curb.

The reason the book is called Wheat Belly is pretty clear from the beginning chapters. Wheat actually causes your body to store fat. It elevates blood sugar almost more than any other carb, including candy bars. It triggers insulin and the growth of fat, especially in the abdominal area. Not only does it make us fatter, it also stresses out our endocrine system with all the glucose spikes. If we eat a lot of complex carbs it’s like a roller coaster ride that never ends. It is no wonder that so many are getting type 2 diabetes. They are wearing these bodily systems out!

Another big sticking point is that wheat and other grains make the body acidic. This, coupled with concerns about factory farming, was why I gave up meat. I did not realize that grains had the same, and even worse, effect. I would have been much better served giving those up instead but conventional wisdom trains us to believe that grains are so good for us. Just think about how many times you read a food package and it says “Heart Healthy Whole Grains”.

There is so much information in this book that I barely knew where to start in reviewing it. I think I have hit on several of the major points but I barely scratched the surface. It is a must read for anyone who is eating grains.

Here is to a great “grain free” year!