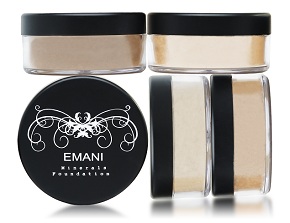 I am not much for wearing makeup. I can count on one hand how many times I wear it in a year’s time. Mostly this is because I just don’t care for the feel of it on my face and also because the skin is a penetrable organ that can easily absorb any chemicals we put on it. Makeup is generally pretty nasty stuff, hence my reluctance to wear it. I am also so used to not wearing any that I cannot get over how “clownish” I appear to myself when I do.

My resolution for 2012 to have more fun has meant going out more though… to places that require something other than a ripped Guns N Rose tee and perhaps a smidgen of makeup. When I went to Detroit for the Ford NAIAS a few weeks ago I had to dress business casual and I opted to wear a bit of makeup. Also this past Halloween my daughter dressed as Cleopatra and wanted to wear some makeup. For both occasions I decided to use Emani Minerals Makeup, which was sent to me to review last year.

Overall, I have been pleased with Emani makeup. It took awhile to get used to seeing myself wear makeup but other family members seemed to like it. I got tons of kisses from my 6 year old son when I wore it! LOL. My daughter told me I looked like Lady Gaga which almost made me turn tail and wash it off the after my first test run but I had to remember she may not remember me ever wearing makeup before. She was the real tester though since all other kinds of makeup make her break out in a rash. The poor child looks miserable if she she dares to play in her friend’s or grandmother’s makeup. When she wore Emani Minerals on Halloween (blush and gloss) her skin did not react at all. Awesome!

Their products use certified organic ingredients from plant or flower extracts in their formulations and they combine these extracts with key ingredients such as mica, titanium dioxide and iron oxides. They are paraben free, vegan, and gluten friendly too. Compared to mainstream makeup you will find at the drug store these are much, much better. The majority of the Emani products I saw on the the Skin Deep database rated at a 1 or 2 so they rank pretty safe there.

Now I just have to get used to the site of myself wearing makeup!