↑
You are here: Home / Self Sufficiency / Freeganism and Eating Your Way To A Healthier Environment 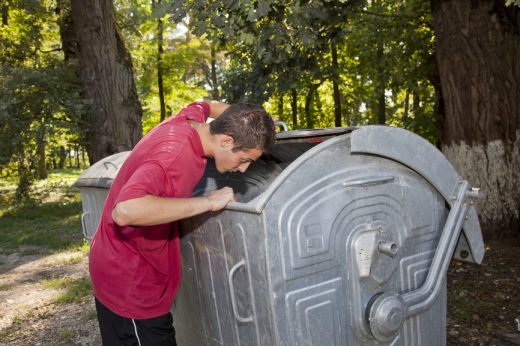 Americans throw away millions of dollars worth of food every year. This food ends up in dumpsters and garbage bins and eventually in landfills where it impacts the environment. It also impacts the environment when we have to keep growing more food than we actually need. Just think about all the energy used to grow crops and the taxation of the soil. Throwing food away is highly wasteful and hurtful to our planet.

There is a movement out there that wants to change all that, and the movement is called freeganism.

What Is Freeganism and How To Use It Solve Food Waste?

Freegans are people who take the food that is about to be thrown away or has been thrown away and use it. These people talk to grocery stores, restaurants and other places that dispose of large quantities of food waste on a daily basis and ask to collect that food waste instead of the business disposing it. Others go to the extreme of actually removing food that has all ready been disposed of (dumpster diving) and eating that. This may seem radical but often times it is perfectly good food that is being thrown away. It gets tossed because they have a new shipment of fruits and veggies they need room for or they toss out the bruised or slightly imperfect foods. Other times they throw out foods that have officially expired but which will be perfectly good for another few days at least.

The goal is to reduce the impact of this wasted food on the environment in two ways. First, by saving the still edible portions of food from ending up in a landfill thus reducing waste and reducing their need to buy more “new” food. Second because they aren’t adding to waste by buying packaged food and then having to dispose of the packaging. They are helping their own pocket books in these tough economic times by reducing their food bills and many freegans also donate perfectly good food to shelters in need.

Most people’s first reaction to freeganism is anything but positive, the truth is, that you don’t have to go to extremes to become a freegan. There are some safe and hygienic ways that you can join the movement without jeopardizing your families health. Here are some tips for those who are wondering how they can help to reduce food waste and help the environment.

・ Freeganism at home – The best place to begin your freegan activities is at home by finding ways to use those left overs instead of throwing them out. There are a number of great soups, stews, smoothies, and casseroles that you make from those small portions of left overs rather than tossing them in trash.

・ Speak to local restaurant owners or managers. Make an appointment with your local restaurant owners or managers. Many restaurants throw soups, vegetables, and other foods such as mashed potatoes away at the end of the night. There is nothing wrong with these foods they simply did not use them and have policies not to serve them the next day. If you bring your own containers some restaurants will allow you to take these leftovers at the end of the night at closing time.

・ The Local Grocers Or Deli-You can also talk to your local grocer or deli, from these types of places you may be able to get large ham bones to make soups from, or small ends of meat. These are things they can’t use in their products and may be willing to give to you because it also conserves on the amount of trash they may have to pay to be hauled away.

And of course freeganism doesn’t just have to be about food. It can be about finding anything useful in the garbage, giving it a second life, and keeping it out of landfills. While freeganism may not be for everyone it is a way that you can have a positive effect on the environment while saving a little extra money as well.

Have you ever tried freegnism? Would you be willing to?

My article with a real freegan on using on using Freeganism for Charity Work. This woman has donated almost $100,000 worth of food to charity organizations via this collection method.

Also the book, The Art & Science Of Dumpster Diving. It is a hilarious how-to guide.