↑
You are here: Home / Children / The Lorax Movie Review 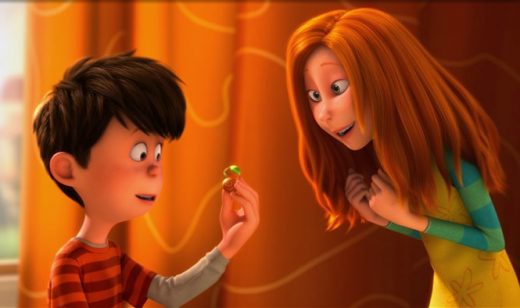 As I mentioned previously we took the kids to an advance screening of The Lorax in 3D this past Saturday. The kids loved it of course, as did I. I went into the experience being skeptical about the depth into which the movie would go to show environmental destruction and the greed/ignorance that motivates it and allows it. I was pleasantly surprised to find that this movie didn’t pull any punches. It went there. As a movie it now rates pretty darn high on my list of animated films to love, alongside Toy Story and Despicable Me. I laughed and I cried (twice, but they were happy tears) and this is a movie we will be be picking up on DVD for sure, as soon we can. I will also likely take my kids to the theater to see it again. The 3D version was awesome but my youngest has sensory issues and refuses to wear 3D glasses so I want him to experience it again, with less blurriness. And you HAVE to see those Truffula Trees in all their glory. Ever since I first read the Lorax book when I was a kid I always thought the trees were the stuff of magic. Who wouldn’t adore trees that looked like cotton candy???! The movie trees were everything I dreamed they would be.

So what’s the movie about? It is centered around adorable Ted (voiced by Zac Efron), a 12-year-old young boy who lives in Thneed-Ville, a city that, aside from the citizens, is completely artificial and plastic. He has a crush on Audrey who has a fascination with something she has never had the pleasure of seeing in real life… a real tree. You see the trees in their city are all fake and they are programmed to change color with the seasons and be all that you would ever need from a tree but they aren’t real or alive. They also do not provide clean air which is why the powers that be (the mayor and his cronies), thwart any attempt to grow trees or even speak about them because the city and his empire has been built selling purified air to the masses.

Ted sets out to find the one thing that will secure Audrey’s heart, a real tree. He gets some super secret intel from his Grandmother (Betty White) and then he leaves the city to find a tree. There in the tree stump waste land outside the city he meets the reclusive Once-ler, who shares the story of how he met the Lorax, the keeper of the trees. He was just a young entrepreneur back then and he decided he needed to use beautiful Truffula Tree tufts to make a product with universal appeal and demand. This idea eventually causes a downward spiral into mass overproduction, which then leads to the depletion of all the beautiful trees. In a cool twist it was also this event that lead to the birth of Ted’s town as he now knows it since the bad air quality left the door open for another unscrupulous businessman to create the next product in demand, clean air. It also provided a motive to make sure trees stay gone.

In a very groovy musical scene the movie shows the production of the Once-ler’s product and it shows him getting physically larger and larger and also getting greener with greed. I thought the visual was amazing. He literally steps on people below him as he gets larger and tells them to worry about themselves and not what he is doing, all the while he is destroying their shared resources. The 1% versus the 99% anyone? In a hilarious scene he throws one of his products (which looks like a sweater) on top of the Lorax and just then a photo is snapped and captioned with the words “Lorax Approved!” just as the lyrics in the song chime about deceptive advertising. Priceless! 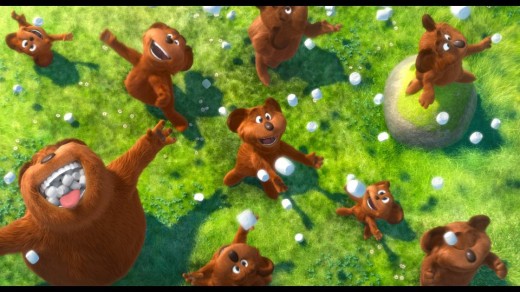 I also loved the fact that it in direct and indirect ways talked about other environmental issues beyond the trees and air quality. The effects of deforestation on animal life is well represented and you will fall in love with all the creatures who lived there. The mayor’s cronies come up with an idea to bottle air and market it much like a beverage. They gleefully tell the mayor that all the pollution caused from manufacturing the plastic bottles will create even more demand for the product. I was really surprised to see such an indictment of plastic and plastic bottles in this film. The water quality in the city is also bad and makes children glow. Their food is not real food but rather some sort of jello-like substance and yet Ted ironically called marshmallows “junk food”. They have fake food just like we do, LOL. Also one of the chief ways the mayor and his bunch keep the public from desiring real trees, vegetation, food, etc is to make it seem dirty and unsanitary. In the uber artificial and sanitary Theed-Ville they are opposed to mess and dirt.

Anyway…  back to Ted. The Once-ler gives Ted the last Truffula Seed and Ted sets out to give it to Audrey but is converged upon by the Mayor and his thugs. Ted knows he won’t win this battle without help so he sets out to remind his town of the importance of nature so that they can join together and bring back the trees.

I will stop there and not give away any ending bits and pieces but the movie was phenomenal. I know it has come under fire from some for the way in which it has been marketed and the partnership and product tie ins that have been associated with it. I cannot deny the validity of those claims but as far as the actual movie is concerned, it is pretty darn near flawless. The movie is more upbeat than the book and the Lorax is not so grouchy and judgmental, which I liked a lot. Overall I think I prefer the movie to the book. Yes, some may think that is sacrilegious but hey, it’s how I feel. I find the book to be a bit depressing and did not find the movie to be so at all. Sure it had its sad and frustrating moments but mostly it was inspirational and encouraging. It gets a definitive A+ from me.