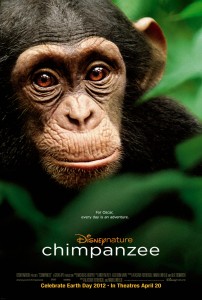 If you area anything like me you are trying to firm up Earth Day Plans already. How do you spend the day? Do you stay home and conserve fuel and energy? Do you plant a tree or do some gardening? Do you do a community service project? Well, one idea might be to check out the DisneyNature film Chimpanzee which will be released on April 20, just in time for Earth Day festivities.

DisneyNature films are always stellar and I think this will be no exception, just like African Cats and Oceans. My youngest (6) especially would love this. He spends a fair amount of time watching Netflix animal documentaries.  The movie is a nature documentary about a young chimpanzee named Oscar who finds himself alone in the African forests until he is adopted by another chimpanzee. The film was co-produced by Disneynature and the Jane Goodall Institute. A portion of the opening week proceeds will go to the latter. Earth Day or the days immediately before would be a great time to see it for that reason alone.

View the trailer below. Oscar sure is a cutie!