↑
You are here: Home / Book Reviews / Bringing Up Bebe – The Wisdom of French Parenting 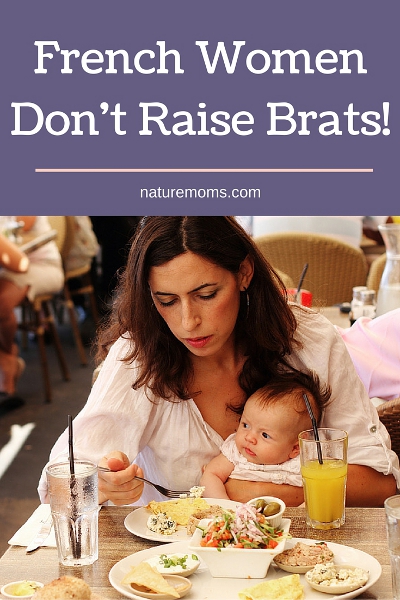 I admire attachment parenting philosophy quite a bit and that is primarily what guided me when my babes were little. I have mentioned in the past though that my endeavor to be a good, attached parent kind of lead me to a place were I was lost, frazzled, and on the verge of a divorce. I felt like I was a slave to my kids every need and only now with more modern books on AP, like Mayim Bialik’s Beyond the Sling am I seeing warnings to make sure that marital and personal relationships as well as career not be sacrificed to the AP Gods. It is really easy to let AP or other similar parenting philosophies turn into permissive parenting with the parents being afraid to be the authority in their own homes.

And yet despite my love of AP, some of my authoritarian upbringing always popped up and it made me feel selfish and guilty. Should I really just be flat out saying no to this request or should I be looking for a compromise that will show that I am respecting my child’s wishes and desires as an individual? Should I be down on the floor playing Legos with my child to show I am a playful parent or is it okay to do what feels right to me…which is require him/her to self entertain (and quietly) so I can enjoy a cup of tea and a phone call with an old friend? I was constantly questioning how instinct was leading me to react/parent/discipline and how I felt I “should” be parenting because this or that book on AP or cooperative parenting said I should.

In hindsight I wish I had just listened to my instincts more. This is not because I think I made mistakes (though I am sure they are many) but rather because I let parenting become my career and my life as a stay at home mom and my self worth became largely wrapped up in that. With two boys on the autism spectrum that is just a recipe for disaster. It was only after my family almost broke in half that I realized that if mama isn’t happy and satisfied in her own personal and professional life…no one is going to be happy.

I decided to make it my goal to devote more time to to self care. I didn’t ignore my kids or my husband but I carved out time for myself each and every day, sometimes several hours of the day and did stuff just for me. I went to the library, I went to the movies, I got pedicures and manicures, I went to the gym 4-5 days week, I went thrift store shopping, and I refused to take kids with me if I didn’t want to. Heck, I took a solo two-day vacation and have another booked in a couple months. Previously, I always hated it when I heard women say they were trying to find themselves but I understood it perfectly after that year was up. The pre-child me, who had many and varied interests, was back in full force.

Anyway, that was a really long winded intro to telling you about a parenting book I recently read and throughly enjoyed.  The book is Bringing Up Bebe: One American Mother Discovers the Wisdom of French Parenting. It was written by Pamela Druckerman, who is an American living in France and raising three kids there. She wrote the book after seeing how much differently American children behave than French Children. While her 18 month old was bouncing off the walls in a French restaurant and making her consider eating at home forever more, the French babies and children were happy and chatty yet largely docile. French parents were not frazzled and stressed, instead they seemed to really enjoy parenting. After finding a study that showed American parents were twice as likely to consider themselves unhappy with child care when compared to French parents Druckerman decided she wanted to know what French parents were doing differently.

I must say that I absolutely loved the book and it gave me so much food for thought. So much about AP and other child centric parenting philosophies, like radical unschooling, lead parents to focus on the needs and wants of their children to the exclusion of everything else. Radical unschooling even boasts the idea that you never say “no ” to your child…you always find a way to say “yes”. Hearing no will kill their spirits or something. French parents also believe that children should be respected and their wishes honored but only in balance with the needs and wishes of everyone else in the household. French parents believe in teaching their children from infancy how to exhibit self control and deal appropriately with frustration and the dreaded “non” or “no”. The reason those French babies and children were not acting up in the restaurant is because they had already had many months or years or training to wait and be “sage” or in control of himself or herself. And rather than being dull and sparkless children you get happy children who also have amazing manners and self control. This is in contrast to the American idea that exerting that kind of influence or restricting our kids in such a way will kill their spirit and crush them emotionally.

The French seem very rigid and structured in many ways and yet they also believe in letting their children devote time to nothing but pleasures and fun. They believe in speaking to their children respectfully and like they would any other adult, even from the time they are infants because they believe that all babies are rational and capable of learning. That aspect is very AP friendly even if some of their other ideas are not (no co-sleeping, extended breastfeeding, etc.). In many ways they are AP parents who just never let the the household become child centric in any fashion and parents who are not afraid to be the authority in their homes. And amazingly enough all the French seem to be on the same page with this. The way the French children are parented at home is the same way they are cared for in government run creches (or daycare), which sound amazing BTW. If France is what right-wing Americans have in mind when they talk about socialism, then we need lots and lots more of that evil socialism please!!!

Overall I think the book has a lot of value and the arguments made for stricter households, proper manners, and not becoming a slave to your children are well worth the read. I didn’t agree with everything of course, such as not breastfeeding past 3 months, but most of it I quite heartily agreed with. It was also a true pleasure to read. How many parenting books keep you up at night long past bedtime?? A resounding A++ and I really hope there will a follow up that deals with parenting French teens, since I am one year away from that milestone.

equilibre (eh-key-lee-bruh) – Balance. Not letting any one part of life – including being a parent –  overwhelm the other parts.