↑
You are here: Home / Book Reviews / French Kids Eat Everything 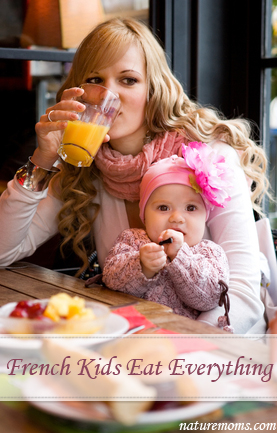 I have a bit of a love affair going on with all things French right now. This is due in no small part to the some of the books coming out about French living, parenting philosophies, and cooking for kids. Do you remember my review of the awesome book Bringing Up Bebe – The Wisdom of French Parenting? Well that got me started and I can’t seem to stop. I loved that book and it made me realize that whereas attachment parenting resonated most with me whilst my kids were little I am definitely taking a page from French moms nowadays. It was where I was introduced to the concept of equilibre (eh-key-lee-bruh) or balance. Not letting any one part of life – including being a parent –  overwhelm the other parts. Everyone probably wishes they had some do-overs in regards to parenting choices but one of my do overs would be to have lots more equilibre as a mom, wife, and woman with her own interests and passions.

Among others books I have recently picked up are Paris in Love: A Memoir about a woman who sold off her belongings and moved her family to Paris for a year. I wish!! Also French Kids Eat Everything: How Our Family Moved to France, Cured Picky Eating, Banned Snacking, and Discovered 10 Simple Rules for Raising Happy, Healthy Eaters.

Just like the aforementioned parenting book, I loved French Kids Eat Everything. Like the previous author, Karen Le Billon also moved to France only to be amazed by how mannerly French kids were and how they eat anything and everything set before them. French kids could manage to stay well behaved through a four hour meal with their parents and they relished foods that her own kids wouldn’t touch. The stark contrast between her own children and french children spurred her to investigate just what French parents were doing to achieve the near miraculous. This book is the result of all that research and also a memoir of her experiences and conversations. It is not only informative and helpful…it is also a page turner. How many parenting books and healthy eating books can boast that??

Once again I was amazed by how the school system works in France and just how well kids there eat. It is really a very rigid system and actually a rather punitive. No one’s quirks and preferences are pandered to and you if you don’t toe the line and conform to the rule of standard you are ostracised. While that may sound bad to me if that involves test scores or homework I see lots of value in that if it is nutrition education. Food education is mandatory in the French schooling system and this is so important because it ensures that all French children are eating healthy diets regardless of circumstance. We can see how in America it is the wealthier people who have greater access to healthy foods and nutrition education. It is just not like that in France. All kids from the time they are babies are encouraged to eat healthy foods within the school and daycare systems (also government run). Parents had the same education so they are on the same page. It really appears to be an awesome example of citizens and government being in sync with what is best for the people and nutritional health. In America the guy who vandalizes a McDonalds goes to jail. In France he is elected to office for being a crusader (true story).

In the US our government subsidizes crap food to make it artificially cheap whilst keeping healthy foods out of the reach of the poorer individuals. Nutrition education is also a joke. In France the kids are not only being taught from day one what is healthy to eat they are provided stellar meals with fresh fruit and veggies making an appearance every day (and being eaten), meats that include real chicken, fish, crab, roast pork (even in the poorest districts), real desserts (not twinkies), and water instead of sugary colored milk. Some schools even send home meals suggestions in advance for evening meals so that children are eating a perfectly planned and balanced diet.

You also won’t find too much of the fake processed foods in France that Americans seem to love so much. They have an affinity for healthy, quality foods and take pride in being foodies who want only the best. That may sound elitist but remember this is EVERYONE from the rich banker, to the school teacher, to the guy who fixes carburetors.

There are ten food rules in the book that were modeled to reflect the way of the French system and the author used to them to overhaul her own family’s eating habits. Many of them  I copied into a notebook or on post it notes on the frig. Food rule #2 is to avoid emotional eating by not using food as a pacifier, punishment, or reward. I know this to be excellent advice but it is so hard to do in practice, especially if you were raised in a contradictory way. #3 revolves around scheduling and planning meals (much better than I currently do) and making sure kids eat what the adults eat or they don’t eat…period. Amen to that as I chuck my short order cooking apron.

Food rule #4 is all about making all meal times social and beautiful, ala setting the table like royalty is coming to dinner and really making every meal meaningful. #7 is about avoiding snacks, which we are already implementing. Snacking is just not done in France and I happen to LOVE this. I have such a hard time convincing my own kids that they will not die if they are not allowed to graze all day.

One of the best tips I picked up was about adding more veggies to the diet (I forget what food rule that was). The author started making soups reminiscent of the purees that French babies eat to train their palates for all manner of fresh veggies. Her kids were older but she wanted to introduce them to veggies (which they refused to touch) in much the same way. Hubby and I discussed it and are now planning menus that include a thick veggie based soup as a first course before the main event. Think carrot soup, leek soup, cauliflower soup, broccoli soup, turnip soup, ect with lots of fresh herbs and spices thrown in. I can make just enough so that everyone gets about 1/4 cup to a whole cup and that needs to be eaten first. A particular soup never appears more than once in the same week. There are usually veggies in the main dish too but this just adds another veggie opportunity and a way to sneak stuff in that they normally won’t eat. Such a simple yet brilliant idea and the book is full of great tips and ideas.

I highly recommend French Kids Eat Everything as leisure reading for the health minded but especially if you struggle with making sure your kids are eating a varied and balanced diet. Enjoy!