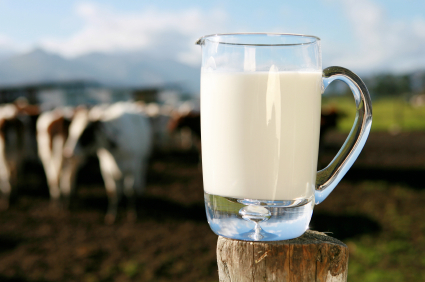 British academics investigating why farmers families suffer fewer allergies than others found that even occasional consumption of raw  unpasteurised  milk had a powerful effect.

Just a couple of glasses a week reduced a childs chances of developing eczema by almost 40 per cent and hayfever by 10 per cent.

Blood tests revealed that drinking raw milk more than halves levels of histamine, a chemical pumped out by cells in response to an allergen.

It is thought the milk contains bacteria that help to prime the immune system.

But the findings, published in the Journal Of Allergy, Asthma And Immunology, are controversial because unpasteurised milk is also a source of potentially fatal food-poisoning bugs.

Raw milk was banned from sale in Scotland 20 years ago, and can be sold by farmers in England and Wales only with labels clearly warning of the risks.

There has been a huge increase in the number of children suffering allergies in the past 30 years. One in three is now affected by eczema, hayfever or asthma  double the level 20 years ago.

And in the past ten years, the number of people needing emergency hospital treatment for severe allergic reactions has trebled to about 6,000 a year.

One of the biggest mysteries is why children raised on farms seem to suffer less than those in towns and cities, even though they are exposed to many more allergens.

When researchers at the University of London analysed the diet and health of 4,700 primary school children in Shropshire, they found that those who lived on farms had significantly fewer symptoms of asthma, hayfever and eczema.

The study looked at whether children were breast-fed and how often they were in contact with animals or played in barns. The greatest benefits were found to come from drinking raw milk.

When the immune system comes into contact with an allergen, it overreacts by pumping out huge quantities of IgE.

The antibody causes cells to release histamine into the bloodstream and it is this release that triggers allergy symptoms.

It might be that even relatively infrequent exposure to unpasteurised milk is sufficient to have a protective effect, the researchers concluded.

But some experts are warning parents that any benefits are still far outweighed by the chances of their child becoming infected with organisms such as E. coli and campylobacter, two of the main food-poisoning bugs.

Even if there are benefits in terms of allergies, the risks from drinking unpasteurised milk are just too great, says Professor Hugh Pennington, a retired microbiologist who has investigated some of Britains worst food poisoning outbreaks.

Pasteurisation is there as a safety net to kill off any bugs.

Pasteurised milk sold in supermarkets has been heated to 71C for 15 seconds. This destroys bad bacteria and extends the shelf life.

But some campaigners believe it also kills off good bacteria which help protect the gut against disease, and significantly reduces the milks vitamin content.

Unpasteurised cows or goats milk has not been heat-treated, and still contains bacteria from the animal.

Sold as green top bottled milk, it accounts for about one per cent of milk sales in England and Wales and is available only direct from farms, or through farmers markets.

It is estimated that about 130 dairy farms sell raw milk.

The Chartered Institute Of Environmental Health is pushing for a ban on sales of unpasteurised milk in England.

But John Barron, from Beaconhill Farm in Herefordshire, says demand is growing for raw milk produced by his 40-strong herd of Jersey cows.

He sells about 50 litres a week, at £1 a litre, from his farm and through markets.

Ive got lots of customers who give it to their children and there has never been a single case of food poisoning, he says.

I get inquiries from as far as Manchester, Birmingham and Yorkshire from people wanting to know where they can get hold of raw milk.

‘I even get calls from cancer victims because they believe it will help them. Demand is definitely growing.