↑
You are here: Home / Book Reviews / The Cure – Heal Your Body, Save Your Life 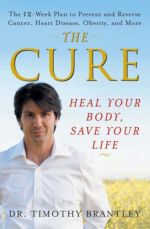 Do you believe in destiny? Maybe the law of attraction? Sometimes destiny or a higher power driving our actions seems the most plausible explanation and I had a freaky experience with it last weekend. I spent a Thursday night reading a book called The Cure – Heal Your Body, Save Your Life. I was so engrossed that I stayed up very late reading it and occasionally woke my hubby up to tell him about something I read. I felt like I was reading the most important book out there about health and healing your body after years of dietary abuse.

Dr. Brantley shares his own struggle with health and how he was raised by a father who owned an extermination business. In addition to a terrible Standard American Diet (SAD) he was regularly doused in chemicals as he helped his dad with the family business. Both of his parents died young and he was in terrible health himself. He made the decision as a young adult that he would find a CURE for himself…he would find out how to detox from years of chemical exposure and he would find out how to feed his body what it needed. His story is nothing short of amazing…but also amazing are the stories of people who saw his transformation and then started coming to him to help save their own lives.

Two stories resonated with me personally. One was about young mom who had breast and colon cancer and the other had cervical cancer. The first woman was told she would die within 1-2 months and that no treatments would help her. The second woman was told she had to have a hysterectomy and radiation to save herself. Neither was willing to except that prognosis. After following Dr. Brantley’s detox and diet program both returned to their physician’s months later only to find that their cancer was gone. Not smaller, not improving, but 100% gone. In fact both women were tested multiple times because their doctor’s refused to believe it was true. They were cured and not by Dr. Brantley but by their own bodies.

Two other stories also caught my attention. Dr. Brantely helped to cure a man who had bad asthma his whole life. The other was a story of a woman whose heart was regularly skipping beats and she and her doctors feared she would eventually have heart failure. These stories appealed to me because my father has had terrible asthma his whole life and he recently developed the same skipping heart beats problem. The morning after I finished the book my mom called to tell me my dad was in the hospital again with this same heart issue. Those kind of experiences give you goosebumps. Now I wish I could tell you my dad is on board with changing his lifestyle as Brantely recommended but some people will always trust doctors more than their own amazing bodies. Personally I think we have grown to mistrust the power of our own bodies to heal. I know I did. When I got cancer I felt like my body was a traitor but a couple years later I can clearly see how you do reap what you sow. I abused my body heavily for years and then it got sick, that was no one’s fault but my own.

The stories in The Cure are amazing and inspiring. And the timing of all this really makes me feel that Dr. Brantley has found a way to tap into your body’s ability to heal on its own. It also made me realize that I have some serious detoxing to do. He expelled extermination chemicals some 10-15 years after his exposure…so much so that people would walk into his apartment while he was detoxing and ask if he just had the place sprayed! I know I have some nasty chemo chemicals that need to come out.

The only thing I didn’t like about this book was the lack of step by step detox instructions. He more or less just calls upon the reader to research and find the detox programs for each body system on their own. I also feel like calling Brantley (if I could) and asking him about gall bladder/liver cleanses and how one who has no gall bladder would fair… I don’t need to spend any more time in the hospital. Doctors removed my gall bladder during the chemo because I got acute pancreatitis. I also wonder about colon cleanses since I don’t have a lot of colon left, LOL. He talks a TON about colon cleansing and using a colema board.

So it looks like I need to dive into research. If anyone has any leads on good detox programs let me know! And I highly recommend Dr. Brantley’s book!

Oh and if your like me and the book ended to soon you can continue reading about the power of transformation in the book Eating in the Raw by Carol Alt, much of it dicsusses how she became a patient of Dr. Brantley and how she healed herself from some pretty serious health problems.