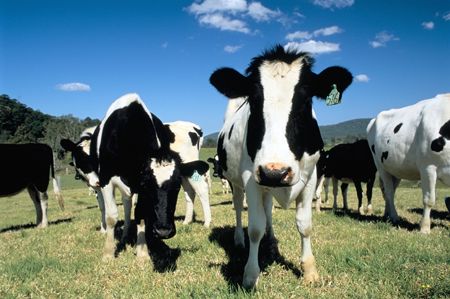 Am I the last green blogger to see this? Probably. But thanks to Netflix… yeah I must be the last person to try Netflix too… I am catching up on all those green documentaries I have been wanting to see and for dirt cheap I might add. Netflix rocks!

Anyway, Food Inc is a documentary about our food, where it comes from, the true cost, why junk foods seems to cost less than the good stuff, and why looking at our food chain can be a terrifying experience. Factory farms and Monsanto are the stuff of nightmares I tell you.. I was agitated for days after watching it. Here were some of the main things I got out of it:

Monsanto is dark side of the force all the way. In the documentary we follow an elderly gentleman who runs a seed cleaning business that is being sued by Monsanto. He has to PROVE his innocence rather than them prove his guilt. Whereas he used to be one of 3 cleaners that existed in every county in his state, Monsanto has now sued and run every single one out if business in the entire state, save 3. Monsanto also regularly sues other companies that sell seeds, even though they have no basis for a lawsuit.. they bankrupt the companies with legal fees before a verdict can even be reached. At this rate Monsanto will be the one and only company you will ever be able to get seeds from in the future and since they have been allowed to patent seeds you will be sued for millions if you save any of their seeds. It was seriously scary enough for me to immediately start Googling places to get heirloom seeds and this year I WILL be saving seeds. My grandkids might need them!!

A mother whose child died from ecoli from a hamburger meat at a factory farm cannot tell the name of the company who sold the tainted meat or she will be convicted of a felony. The story of her son’s death had me bawling… bring the tissues. He died a painful, horrific death as a result of an irresponsible industry and yet every year the the government makes it harder for us to to grow/raise our own food.

Veggie Libel laws exist in several states.. aka if you speak badly about food products you can be sued. In Colorado it is a felony even. If your apples made you sick or you were sold tainted beef you are not allowed to talk about it because that can cause “harm” to the producer. Remember Oprah was sued in a 6 year court battle because she said on TV that she could not stomach eating hamburgers due to mad cow disease. Talking bad about hamburgers is a “crime”. How can the free market be free if you can’t speak out (good or bad) about the products you buy?

Instead of changing their products to meet consumer demands when certain ingredients fall out of favor… these corporations opt to use their politician friends to pass laws so that the companies are not required to label those ingredients anymore.

Junk foods are subsidized by our government so that the costs can stay cheap. This is why you see a family buy two hamburgers at McDonalds for their kids instead of buying some veggies. If you add health and environmental impact though, those foods are not so cheap.

If you decide to boycott an unethical company you may be out of luck because that one company likely owns 10 other companies that make the same product under a different brand name so that you never know it is the exact same company. Those same companies are also buying up organic food and natural products companies left and right. Tom’s of Maine is now owned by Colgate and Burt’s Bess is owned by Clorox. The company you love to hate may now be the owner of some of your favorite products and if you continue to buy you are funding their bad behavior.

Food Inc. movie gets a big A+ for me for being interesting, thought provoking, and incredibly important. I highly recommend it!