↑
You are here: Home / Healthy Eating / Shopping At Farmer’s Markets with Food Stamps 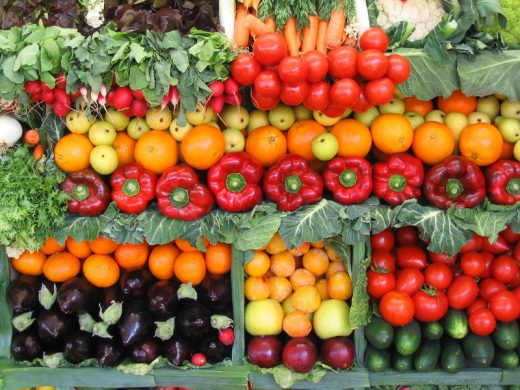 An article on the NY Daily News caught my eye today about young adults without kids using their food stamps at local farmer’s markets to buy farm fresh veggies, local honey, baked goods, and wild caught rabbit meat and salmon. Surprisingly the article did not insinuate that somehow accepting food stamps makes you only deserving of Twinkies and Ramen noodles like I thought it would… of course the comments are a different story.

I liked this article because I think allowing people to use their food stamps at Farmer’s markets is a stellar idea. People who are struggling to make ends meet deserve healthy food too. There is no reason why they must be relegated to junk food if they actually WANT to eat healthier. This bit for example might get some people’s hair up:

Then there are food stamp users like Gerry Mak, 31, who had very little in terms of a job besides a meager part-time blogging job when he moved to Baltimore last year.

After applying for food stamps and qualifying for $200 a month, he recently prepared roasted rabbit with butter, tarragon and sweet potatoes.

“I’m sort of a foodie, and I’m not going to do the ‘living off ramen’ thing,” Mak said, according to Salon.com. “I used to think that you could only get processed food and government cheese on food stamps, but it’s great that you can get anything.”

Well, it is unfortunate that many people in this country feel they cannot afford to eat this way I don’t begrudge the man a good meal because he is using tax payer dollars to get by. Why? Well, what kind of person would I be if I said that the idea of this guy existing on Twinkies and soda makes me “feel better” somehow? Also, why on earth would we want tax payer dollars to go to supporting big food companies that are already heavily subsidized if there is another way. That money will go to supporting something… so I would prefer Joe the local farmer to ConAgra or Monsanto any day of the week.

It would be a big boon to local economies if food stamp money was going towards local food and farmers. As I mentioned, we already subsidize junk food in the US to make it artificially cheap, which I think is monumentally unfair to small food producers. Giving food stamp users the option to spend money with their neighbors is a step in a better direction.. as indicated by this quote:

That is $200,000 being put in the pockets of the people instead of corporate agribusiness!

Would we see a food stamps recipient eating healthier, albeit more expensive, foods and be thinking “Not on my dime!”? Or would we see them load up on Ramen noodles and Velveeta cheese and think of what those dollars are actually supporting and think, “Not on my dime!”? Personally I would like to see all farmer’s markets be able to accept food stamps and then maybe we would see a huge boost to local economies and local food availability and perhaps prices would come down. People deserve healthy food not processed garbage and our local farmers should be the ones being supported by our tax dollars, not the mega corporations slowly poisoning us.

What do think about this issue? Care to share your 2 cents?