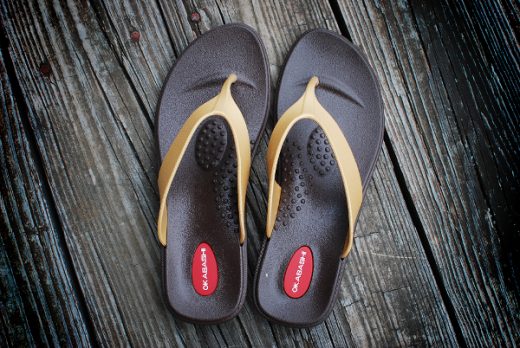 In the past I have been a flip-flop addict of sorts. Years ago it was not uncommon for me to have 10 or more pairs… of JUST flip-flops. In recent years though I curtailed my habit because they are generally so flimsy (lasting only one season) and they are heavy on plastics and foam. They were just a nightmare in the green department. So I tided myself over with sneakers (sniff) that last much longer and eco friendlier shoes when I could swing it.

Anyway when an eco conscious shoe company called Okabashi asked me to take some of their recyclable flip-flops for a test run I agreed to do so. They look just like regular flip-flops but there are several important differences.

For one they are not outsourced to a third world country, thereby paying workers peanuts AND saving resources with local manufacturing. These shoes are made in Buford, Georgia and I have heard you can tour their facility if you want to. The shoes travel only 7% as far as the average imported shoe. Second, they are VERY sturdy shoes, probably the highest quality pair of flip-flops I have ever owned. These babies are going to last years and the company even guarantees them for 2. Buying plastic anything can be a hard sell but when you know that plastic will only last a few months before it becomes completely unusable… that is a deal breaker.

Third, the material used in these shoes is unique in that it is soft, flexible, non-slip, odor-resistant, dishwasher safe, and contains an anti-microbial agent. Who ever heard of shoes you can toss in the dishwasher? Flip-flops especially can get nasty because the foam used so often to make them is porous and holds stains, and odor and cannot be washed effectively. These are going to be perfect for the gym since I can shower in them and wipe them down and make sure nothing nasty from the showers or locker room is going to get a foot hold in my shoes. 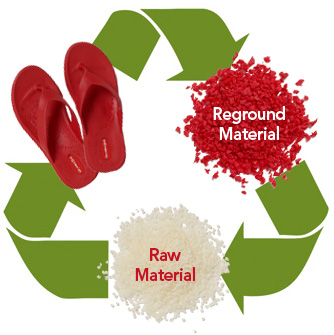 Fourth, these shoes are completely recyclable. Most times when you hear that a company is taking back their shoes for “recycling” that usually means they redistribute them. Okabashi believes in closed-loop recycling to reduce the use of virgin material and to keep old shoes from becoming environmental waste. So when you buy a pair of Okabashi shoes you are likely buying shoes that are made with recycled material already and when you are done with them you can send them back to Georgia (their address is on their web site) so they can be made into yet another pair. Their facility is virtually zero waste.. next to no scrap and last year they used 100,000 pounds of scrap material in their shoes. This is pretty amazing to me since I have first hand knowledge of the plastic scrap that get tossed in a local (Ohio) plastic business. It is STAGGERING the amount of plastic scrap that gets tossed out… ahem… like a huge parking lot full.

Fifth, they are vegan! The entire line contains no animal skins or byproducts, and they are not tested on animals. This is important because most sandals and flip flops that contain animal by-products such as leather and adhesives are nearly impossible to recycle and they end up in the landfill.

Sixth, they are affordable. No $50 flip-flops here. The prices are right around $15-$18. Wahoo! They (Okabashi) also have some listed on Amazon. The price on some is a tad higher but they are darn close to qualifying for free shipping.

I ended up getting two pairs of eco friendlier shoes for the summer and happily these Okabashi flip-flops are one of them because I don’t currently own any others (flip-flops, not shoes). We’ve been reunited and it feels so good.