↑
You are here: Home / Natural Toys / Haba Board Games 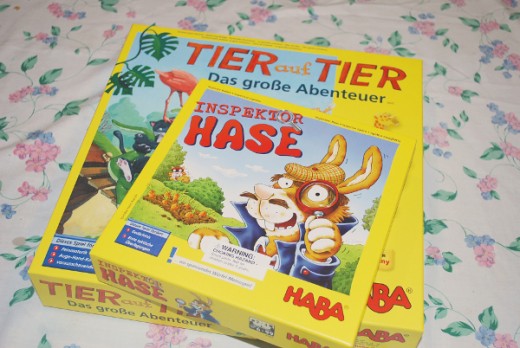 The kids and I spent lots of time playing together over the weekend. After all, it is almost time to get back to the business of school. So, we kicked off the weekend by playing two new games. Monopoly and Battleship are okay I guess but my two smallest kiddos like to play something unique and usually something that involves animals. I like games that involve strategy and aren’t too commercial in nature. Both of these games were a perfect fit for us.

The first we played was Tier auf Tier. These games and the company that makes them are German, just another reason we like them! The standards for toy and game safety in Europe kicks US booty so I know I am relatively safe with their offerings. Haba has long been known as a great source for safe, more sustainable, natural toys. 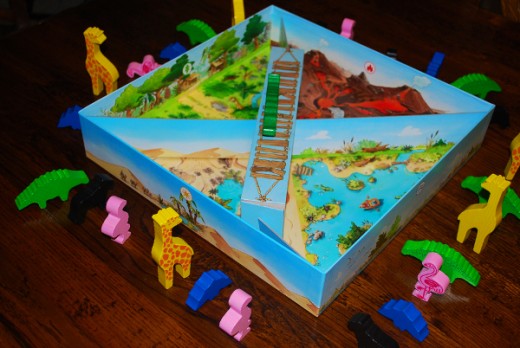 The game box is actually what you use to play the game instead of a board. It is divided into 4 sections and you have a menagerie of wooden animals to place around each section on the box. The animals reminded us of our Haba Eene, Meene, Zoo blocks. They have the same adorable look and feel. A bridge crosses from one side of the box to the other and the object is to stack animals on top of the bridge trying to make the animal combinations on your playing cards. Since two to four players can be stacking at the same time it can be tricky to do. The first player who manages to complete all their animal stacking combos and discard the associated playing cards wins the game. It was fun for my younger kiddos and I think it will be a nice game for them to play with the neighbor kids before school starts next week.

The other game we played was an even bigger hit, with my two oldest and with me. It was so fun I wanted to keep playing again and again and it will likely be the game we break out to play with Dad over the holiday weekend. It is called Inspektor Hase, which means Inspector Rabbit in English. 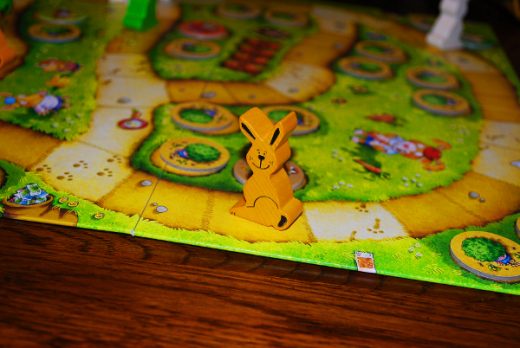 The board game is a garden with a winding path and all throughout the bunny garden there are bandits! You roll the dice and move around the board to uncover the pairs of bandits… hens stealing jewels or moles walking off with gold coins. Each player has two matching bunnies and so when you uncover one of the bandits you can keep one bunny on that space while your other bunny moves around the board to capture the matching bandit. It is mostly a clever spin on memory but it also has a lot of strategy. There are two dice, one  that rolls between 1-3 and one that rolls between 1-6. You can roll one or both at the same time so half the trick is figuring out which die is mostly likely to get you where you need to be, the fastest. You can also boot other players off their space and beat them to the punch. 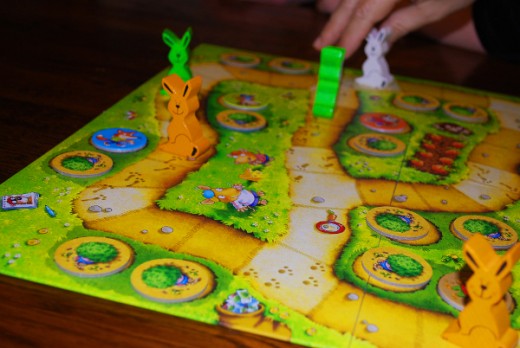 It is a really simple concept but it was a lot of fun… as are most Haba games we typically find. We enjoyed both of them quite a bit but in the spirit of Simplicity Parenting we will keep Inspektor Hase and donate the other to a needier family. Much thanks to Haba for sending these games our way!