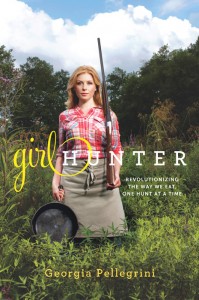 I decided to request this book from the library last week after I saw it pop up a few times on Facebook. I was intrigued by the cover and I think I wanted to challenge myself and my ideas about hunting with another’s women’s perspective. The fact that this particular woman looked like a Manhattan socialite, and indeed she once was, also piqued my curiosity. But I think my motive was mostly to try and come to grips with my own fear and hatred of hunting. I resumed eating meat again late last year and the diet principle I am following (primal/paleo) prizes grass fed, pastured meat sources but also wild game if at all possible. The idea is that “you are what your food eats”. Obviously the healthiest meat you will find comes from animals still living the wild lives and eating the wild foods they were intended to eat.

This is problematic for an omnivore who has always viewed hunting as cruel an unnecessary. I realized even before I read this book that this makes me a big hypocrite. It is ironic that we had guns in our home in Arizona that we could grab quickly if we spotted any javelina or rattlesnakes on our property but that was DEFENSE. Going out to intentionally kill something that wasn’t bothering us… barbaric! That is why I wanted to read Girl Hunter: Revolutionizing the Way We Eat, One Hunt at a Time and I am glad I did.

It really did put it all out there how un-cruel hunting can be, especially when compared with the cruel lives inflicted on the animals that end up in our supermarkets. I know that factory farming is the epitome of cruel but I never quite understood that skilled hunting was and is the much more humane option of the two. It is one of those books that kind of reaches out and slaps you in the face with a big fat dose of reality. Of course if you have eschewed meat altogether then the logic will not mean much to you but for omnivores I think it is an important read.

The books follows Georgia Pellegrini to various places across the US and even in England, where she hunted various game. I appreciated the fact that most of the hunters she same in contact with were avid environmentalists and good stewards of the land they hunted. They also knew more about the animals they hunted and respected them more than most people in my opinion. There were only two hunters that left me with a bad taste in my mouth, the poacher that she calls out in one of her chapters, and also a boar hunter who I felt did not value his hunting dogs beyond their service to him.

Also in the book was information about hunting, the really strict laws that protect each species and the land, and also insight into the lives of all the species she hunted. The author was also refreshingly honest, even telling us about a bad shot that ended up causing an animal to suffer. Much of what I read was also stuff I have heard my husband say over and over, since he has tried to get me to hunt off and on for years. There is just something about reading it from a woman’s more delicate perspective that helped the message come through this time.

The best part of the book was hands down the recipes provided at the end of each chapter. Ms. Pellegrini’s background as a French chef translates into the description of each meal and your mouth is watering with the start of each new chapter. It made me want to try some things I never imagined I would want to try, like squirrel, which she calls the best tasting meat in the woods.

I cannot say that I am strapping on my rifle (I don’t even have one) and heading out into the woods tomorrow but this book was an important, eye opening read and I am glad I read it. My husband and I have been discussing it at length and dissecting our own preconceived ideas about hunting and living off the land. I would also love to meet the Girl Hunter someday!

How do YOU feel about hunting and the “messy bits” that some omnivores don’t like to be confronted with?