A reader recently commented on this post, that she would like to know what I eat every day. Well, it varies wildly from day to day so I decided to pick a day and make a food journal with photos of everything (or almost everything) I ate that day. I chose Leap Day (yesterday). I post recipes quite often but have never done a food journal which is funny because I follow a lot of bloggers who do. For whatever reason I like to know what you had for breakfast, lunch, and dinner. ;)

Anyway, I am not a food photographer so please excuse my awful photos. I can take a decent portrait or candid but food photos… nope, I suck wax fruit. I also didn’t plan any of these meals so they were spur of the moment cooking decisions and food grabs. I think it ended up pretty decent nutritionally but when each meal is planned right then and there it is hard to know. I do usually plan a little more than I did on this day, especially dinner, but some days I am just so busy that we eat a mish mash of whatever we have.

Breakfast was a bowl of grain free cereal with coconut milk. Yes, grain free, paleo cereal is totally possible! It was made with a blend of chopped raw almonds, chopped raw pecans, shredded coconut, and pine nuts, drenched in a half cup of yummy coconut milk. It is low carb with lots of delicious, healthy fats. I didn’t have a whole lot of it though (1/2 cup) because this was a gym day and if I eat too much I will get crampy while working out. Most mornings I just eat a cup of greek yogurt but I felt like mixing it up. 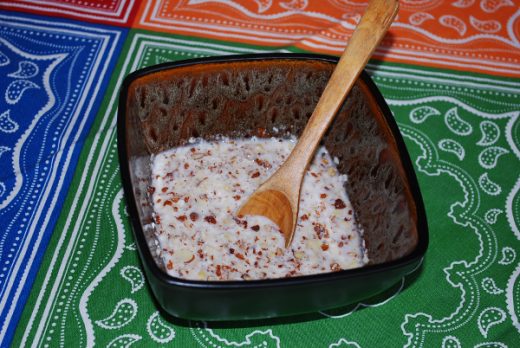 After eating my cereal I showered, put my swimsuit on, and hit the gym. After a one hour swim I rinsed off in the shower and then changed into workout clothes and Vibrams so I could lift some weights. From the gym I drove to the library to pick up some books on reserve and then I drove home to see my youngest kiddo off to school (who was being watched by Daddy). After he left, the husband and I ran some errands and picked up some local pastured eggs (three dozen). When we got home I made lunch for myself. Often times hubby and I make lunch together but he ate and precooked his dinner (for work) while I was at the gym, so I was on my own for lunch. 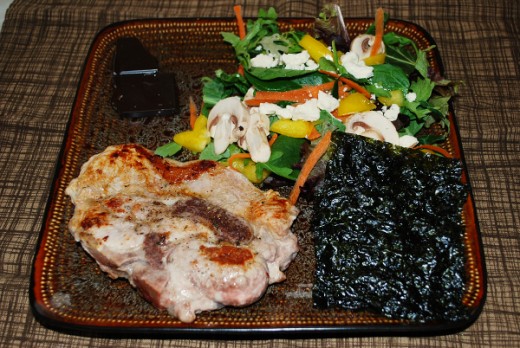 After lunch I sat down at my computer again and worked until dinner with an hour long break spent cleaning out the fridge. Hubby went to work earlier on and the kids came home from school at about 3:00. They did homework and watched Netflix in our family room, where my computer is. They also ran outside to play off and on, taking advantage of bizarre 60 degree weather.

For a mid-day snack I had a homemade chocolate-coconut bar. I adapted it from this recipe, adding some coconut cream concentrate and some raw honey.Yum!! 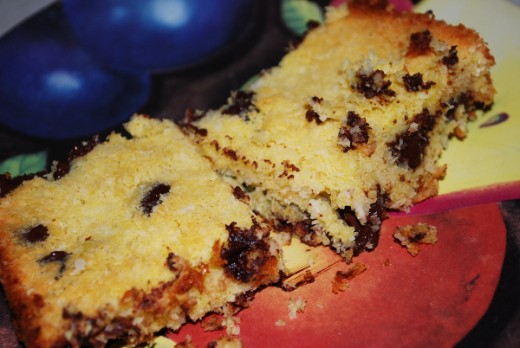 My kids spied the fresh eggs in the frig so they requested tuna egg salad, carrot sticks, and apple slices with almond butter dip for dinner. That was super easy but not what I wanted so I made myself something different. I actually wanted to have grilled fish, sauteed mushrooms, and salad but due to poor planning the fish was still frozen solid. Phooey! So I decided to have breakfast for dinner: 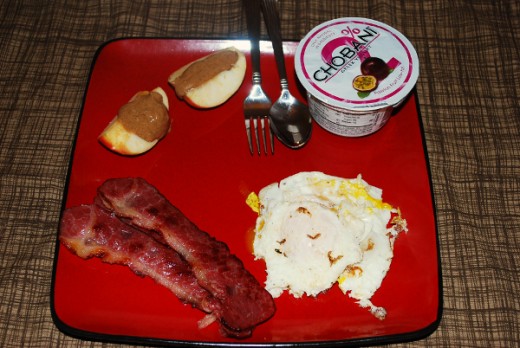 Throughout the day I also had some fish oil and spirulina as well as water to drink. After dinner we did our 15 minute clean-up and then the kids went off to their rooms to do their own thing until bed time. I gave the kitchen a deeper cleaning and baked some more coconut bars for after school snacking throughout the week. I stayed up late since the next day was/is hubby’s day to get up with the kids and hit the gym himself. Since I knew I would get to sleep in (if I wanted) I decided to catch up on some DVR’d shows… ala Justified and Lost Girl. 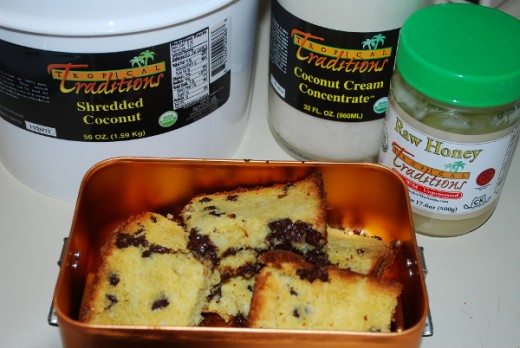 So that is a sampling of what I eat in a day. I can’t say that it is typical because I had more sweet stuff this day than I usually do in a week. I also ate more “packaged” food than usual I think but it’s a real look into my lacto-paleo diet. Today I had more paleo cereal and I rectified that fish craving: 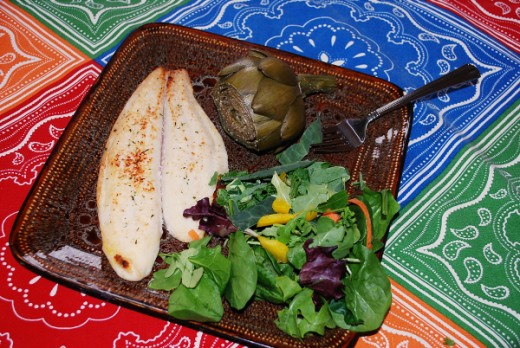 Hubby had the same meal except he had a grass fed steak instead of fish. For dinner I have chicken soup (minus the noodles) stewing in the crock pot. It will be soup and salad for dinner.

What are you having?