↑
You are here: Home / Book Reviews / All the Money In the World Book Review 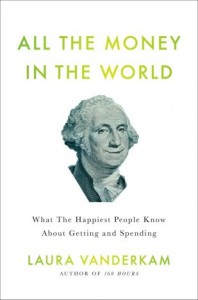 Over the weekend I did very little to celebrate Earth Day. I planned on doing some gardening but alas it was cold and rainy here in Ohio. I ultimately ended up spending the weekend doing laundry, playing Plants vs Zombies in short spurts, and reading library books while in the comfort of my favorite recliner. I also enjoyed hearty crockpot meals. It was a good weekend.

One of the books I read was All the Money in the World: What the Happiest People Know About Getting and Spending. I have read tons of books about personal finance and frugality but I feel as though this book had a lot to offer those who (like me) are sick of the same old regurgitated advice over and over again. I think it also managed to challenge my thinking about money in many ways. You see I am a big David Bach fan. He wrote The Automatic Millionaire among many other books and essentially he talks about giving up those small things that add up (like Lattes) in order to save more over the long term and also making your savings automatic so that you never see much of your money, let alone spend it. After reading his book late last year and putting it into practice I managed to sock away I nice chunk of change. My husband’s 401K went from 2% contributions to 12%, a nice sum also started going from his check into our HSA account and my personal IRA. Amazingly we did not miss the money! I also managed to build up a nice emergency fund and contribute to my IRA from my own income. Woot!

Part of my strategy was to give up those small luxuries and divert that cash to savings. I don’t drink lattes though; my “latte” was my Greek yogurt habit and my love of going to the movies. I gave those up and only ended up feeling deprived and grumpy. Then our savings started to dwindle as we approached the cold weather months. Expenses go up for us that time of year and my husband’s work hours get cut due to lack of seasonal business. That time of year it is typical for him to have weeks at a time off and unpaid. When we came out on the other side of that drought I decided that if that daily yogurt and weekly movie made me happy then I should have them. Most of our money was being saved before we ever touched it and from me taking on extra work projects. That $50 a month spent on stuff I love was not a hardship on us. So I decided to put them back in the budget even if they did represent my “latte factor”.

In All the Money in the World the author, Laura Vanderkam, takes on the notion that money CAN buy happiness and she also disagrees with the idea of giving up those small luxuries that make us happy in daily life. She also thinks that by simply making different choices we can have more of those small luxuries. One of the best examples of this idea in her book is that of the $5300 or so spent on diamond engagement rings on average. She gives several examples of how that money could be spent on things that say “I Love You” and will bring happiness to the couple in daily life… such as date nights every Friday, bouquets of flowers once a month for years, etc. I absolutely loved her ideas on how we can make different choices with our money and that those small choices can bring us lots of happier moments in life. Another idea of hers that I loved was the concept of creating a best weekend ever on occasion and giving yourself $200 to execute it. I planned mine out in my head…

Friday night – Sushi bar, a movie, a margarita (with hubby)
Saturday – One of those local food tours I have been dying to try, Jeni’s Ice Cream, a museum (alone)
Sunday – The zoo or botanical gardens with the kids and steaks on the grill for dinner

I love this idea because it would be just as good as a mini vacation or getaway and yet the cost would be so much less. I know we have a hard time saving for the grand vacations we want and ultimately they would probably be as stressful as they are fun but a grand weekend I could do, easily. We can also do grand weekends that revolve around kiddie stuff.

Okay, so how else do you raise money for these small luxuries? In general most financial books advise you to give them up in pursuit of something bigger, like that Disney vacation or a fully funded IRA. This book doesn’t encourage you to raid your retirement fund or defund it. Rather it encourages you to make more money in creative ways. While some might feel that this is too simplistic, this is actually the route I instinctively took when I decided I wanted a bigger savings and bigger retirement account. When I want more, I work more. I do not decide to eat crap food that there are coupons for, cancel my Netflix, or do without my daily yogurt so I can save money. That ends up being pennies in comparison to taking on a few extra projects and bringing in lump sums of cash.

This past month I decided I wanted to pull the trigger and buy the iPad3 I have been wanting. Instead of seeing what money I could free up or save I went with the option of making that money over and above what I usually make. Doing it that way makes me feel better about spending that kind of money ($600) on myself. I ended up doing it actually with an ample amount to spare but made the colossal mistake of telling my husband I had my iPad money. Suddenly I found myself in an argument for why that money would be better spent by tacking it on to his overtime pay and buying a new-used vehicle instead. I will admit that the argument has merit but I still feel deflated about the iPad. :( I have my doubts that my iPad fund will get paid back as he says. Yet if I had gotten that iPad I would be energized and feel like taking on more work to fund the next thing we wanted…I see so much logic in the reasoning found in this book.

I also liked the advice to think about what you do with a $50,000 windfall or what you would change if you had unlimited money. Personally I would buy a hybrid vehicle, get a 3 bedroom house but stay under 1200ish square feet, hire a house cleaner, and arrange to have sitters more often so I can do date night every two weeks. I would also increase my food budget so we could get the cleanest, greenest, organic, and all around most nourishing food we possibly could. That is about it for my wants and I don’t even need to be rich to have all that. Okay, okay I would also like to take a year or two to travel around Europe and Asia.

If you are looking for better ways to use what you have and you like having your ideas about money challenged, this is a good book to read.

So, what do you think? When you need or want more money do you find all the ways you can scrimp and save or do you go looking for “new” money?