↑
You are here: Home / Book Reviews / Before They Are Gone – A Look at Our Endangered National Parks 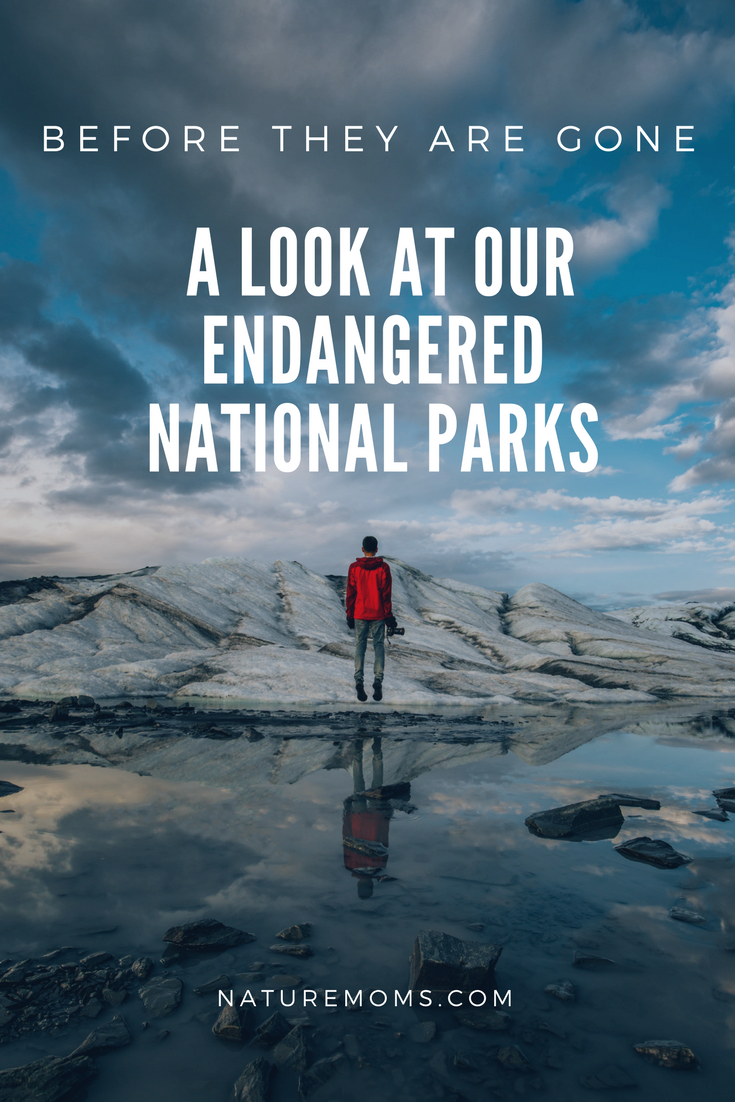 I read a hefty share of travel memoirs every year. I used to travel quite extensively prior to having kids but my pursuit of greener living and also the cost of travel with family has essentially grounded me. Reading travel books is my mental getaway to exotic places where adventure is just around the corner. I especially like to read books about extended travel with families because it is a dream of mine. When I agreed to review Michael Lanza’s book Before They’re Gone: A Family’s Year-Long Quest to Explore America’s Most Endangered National Parks, it seemed to be the perfect marriage between my love of travel books and my love of green living books.

I also thought it would be good for me to stretch my mental muscles and read about a topic that I tend to stay away from, climate change. It’s not that I don’t think climate change is a serious problem it is just one of those subjects that I don’t know a whole lot about sadly. I tend to stick with issues surrounding the home, food sustainability, and immediate dangers to our health and wellness.

This book was a very important read for me though because it made the issue of climate change very personal and easy to understand. I love to travel and I would love for my kids and I to see all our wondrous National Parks and yet some of them are in very real danger of becoming impassable to hikers and travelers. Climate change is melting the glaciers that make an appearance in some, which not only affects the beauty of these areas it also means less water is making its way down to lower areas. Plants and animal life that rely on this water start to become endangered or extinct. Water sources that hikers need to survive start to dry up, making the area inhospitable. Scenic waterfalls dry up earlier and earlier and may eventually be gone for good. Can you even imagine Yosemite without its grand waterfalls???

The melting glaciers create mud slides and rock slides which make the area too dangerous for hikers and campers. The warmer weather also creates wicked storms the likes of which have rarely been seen before and they happen more and more often. This destroys some of the most scenic areas of the parks and also makes it too dangerous for people to go exploring. Hiking trails that once saw many thousands of hikers each and every year steadily become less grand and less hospitable to all manners of life from humans, to animals, to native plants and trees. The trees are also being devastated by insects that are not being killed off in annual frosts anymore. The pest population is permitted to go crazy and the overwhelmed trees are dying off by the thousands. The are some very real problems facing our parks that get worse and worse each year. Many of the park officials and scientists who have worked in these parks for decades feel that they may be shadows of themselves before long.

This is why Michael Lanza decided that his kids needed to see the most endangered parks NOW and they embarked on the year long adventure contained within the pages of Before They’re Gone. Lanza is a veteran freelance outdoors writer and photographer. He is the northwest editor of Backpacker magazine, where his articles about the impacts of climate change on Montana’s Glacier National Park and other wild lands helped Backpacker win a National Magazine Award. He also runs the website TheBigOutside.

I was invited to participate in the blog tour for his wonderful book and I decided to ask him a few questions about it. His answers are amazing and insightful…a must read for nature lovers! Below is the interview. Enjoy!

1. How did your work as an outdoors writer position you uniquely to see the effects of climate change on our National Parks?

For years, I’ve observed how much natural landscapes are changing. The evidence is recorded on maps, many of which are based on decades-old USGS data. I’ve seen dried, cracked earth in places where my map showed an alpine lake, and new lakes or barren talus in places where my map showed a glacier. I was making an off-trail traverse of the Bailey Range in Olympic National Park one September several years ago and ran into a family (parents with their grown kids in their late teens and early 20s) going in the other direction—the only people we saw out there. As it happened, the father was one of the authors of the Olympic Mountains climbers guide; he knew the mountains very well from decades of hiking and climbing. He pointed to a north-facing mountainside above the lake where we were camped, a slope that had just a few small patches of snow and mostly bare ground, and told me with a tone of disbelief, “I’ve never seen that slope not entirely covered with snow in summer.”

It’s disorienting on a couple of levels when a place does not look like what is shown on your map. I’ve puzzled over my exact location more than once. But then, realizing that I was actually standing where I thought I was standing, I’ve felt sadness and awe, and felt deeply disturbed over the idea that our lifestyles are actually altering the face of the planet. I can’t help but fear where this is leading us.

In April 2007, while researching stories for Backpacker about the impacts of climate change on national parks and wilderness, I skied into the Northern Rockies in Glacier National Park with a leading federal scientist there, Dan Fagre, who was predicting that the glaciers in the park would disappear by 2030. On a return visit to backpack for six days in Glacier in September 2009, I met up with Dan again. He told me they had revised that previous forecast because warming and glacial recession had speeded up faster than anticipated: the projected year for no more glaciers in Glacier National Park was now 2020. I thought, Wow, my kids will be just 19 and 17 then. This is not far off in the future—it’s right around the corner. Changes have been underway for years and are happening quickly, within the lifespans of people.

2. What was your biggest motivator for planning this trip and do you hope to do it again in the future?

Dan Fagre’s revised forecast about Glacier National Park’s glaciers and other research I was doing made me realize that many parks could be very different places by the time Nate and Alex are my age. But we also cleared a big hurdle in 2009 in terms of our ability as a family to make these trips. Our son, Nate, who turned nine that September, had been backpacking with me for a few years. But our daughter, Alex, who was six that summer, showed for the first time that she could handle adult-scale backpacking trips. That summer and early fall, we took a rugged, three-day hike in Grand Teton National Park, and a four-day hike in Zion National Park.

Now that we could take trips like this all together, I started thinking more and more in the fall of 2009 about just cramming in as many trips as we could in a year without the kids missing too much school. As I write in my book’s prologue, it’s easy to get caught up in life and not achieve the goals you set or see the places you want to see. I’ve long believed that you just have to get out and do things, because you never know what’s in store for the future. You can’t wait for opportunity to shake you awake—it’s not going to.

Do I hope to do it again? I’m constantly thinking about the next adventure we can take as a family; in fact, I’m usually planning at least three or four simultaneously, thinking about trips appropriate for their ages and abilities. This summer, as a family we’ll go rock climbing and backpacking or rafting in Idaho, hiking in New Hampshire’s White Mountains, and take a nine-day, hut-to-hut trek in Norway. On my tick list for a summer soon: a multi-week Western road trip, a big international trek, and a multi-week backpacking trip on a long trail.

3. After speaking with so many park experts and seeing the effects of climate change yourself, are you pessimistic for the future of our parks or are you optimistic that we can change our current direction?

As I wrote in my book, I choose optimism in part because I think it offers the only hope for the world our kids will inherit. But also, one consistent thread that ran through many of the interviews I did with scientists was the optimism they shared that the parks will always inspire us as much as they did our forefathers who decided to preserve these places. As Dan Fagre told me about Glacier, “It’s still going to be a beautiful park. The notion that it’s being changed ultimately by human activities is something people have to take responsibility for. These are really good things for people to be thinking about.”

I am optimistic that we can change. While there is great resistance to change, there is also great momentum in the right direction. My hope is that increased understanding of what we’re doing to the world our children will inherit, and how our cherished national parks are being affected, will help motivate society to summon the honesty required to do what is necessary and right.

4. What important lesson(s) do you hope that readers of this book will glean from it and what action if any do you hope they will take?

I wrote this book on two levels. On the surface, it’s about my family and the wonderful experiences we shared, which I know have already benefited all of us in many ways—and especially Nate and Alex, because they’re so young. I hope other families will be inspired to take similar adventures that are within their abilities and comfort zones. We too often think our kids can’t do something that’s physically challenging, or we worry that it’s unsafe. Kids are resilient and endlessly curious. Nate and Alex constantly surprise and impress me with how much they can do and how enthusiastic they are about our adventures.

I also hope the deeper message in my book, about climate change, helps motivate people to take action. We aren’t complacent about making sure our kids get a good education or teaching them to make smart, safe decisions. If we’re concerned for their future, we have to be equally engaged in this critical issue of climate. On a personal level, there are many choices we can make to reduce our energy consumption, from walking and biking local errands instead of driving whenever possible, to turning off lights in empty rooms, driving more efficient vehicles, insulating our homes better—there is a wealth of information out there on that subject.

Beyond that, we have to insist that our elected leaders take aggressive action to reduce our consumption of fossil fuels at a societal level. We have to write letters and vote for people who understand how important this is. That’s the kind of change that is really needed to bring emissions down to a level that avoids catastrophic climate change.

The book: Before They’re Gone: A Family’s Year-Long Quest to Explore America’s Most Endangered National Parks