Have a great weekend all! I will be taking it very easy myself because I was knocked onto my tush this week by a cold. I haven’t been sick in quite a long while and my good streak was abruptly ended by a week and a half of bad eating. I had it coming. Life got busy with school graduation parties, a visit from an out of country relative, and a local blogger event. I ended up eating only 50-60% paleo and had grain based meals several times, plus a dessert here and there. All the grains and sugar did me no favors and I will remember this next time I think that having that bread is no big deal. I only managed to get to CrossFit one day this week and that is a big freakin deal! I just feel totally off when I can’t exercise. :(

On the plus side though my baby graduated from preschool and will enter Kindergarten next year. He won a box of Whoppers (the candy) and a Whopper Award for being the biggest story teller. His teacher (whom he loves) also told us how devastated she is by the idea that he won’t be in her class anymore. We get that a lot actually. His future school already has two therapists vying for who gets to work with him. Even with all his issues (autism) he is just the sweetest and most fun child ever. It makes it hard to instruct him because you don’t want to make him focus when he is telling these grand and ridiculously funny stories. I hope and pray he will continue to get teachers who find him so endearing and fun and not get some old grouch who thinks he needs to have that stomped out of him.

I also enjoyed a visit from my big brother who is in the States visiting from his home in Indonesia. He is with the State Department and is in DC for a spell before he moves to Islamabad, Pakistan. It is always nice to catch up with him since I so rarely see him. I adore both of my brothers and am actually taking my younger brother with me to BlogHer 12 in New York City (August).

Which reminds of how excited I am getting about attending my first BlogHer!! Woot! Though lately the #Blogher12 hashtag on Twitter has been making me anxious because its a lot of women trying to sell themselves to brands, begging to get into private parties, and throwing tantrums when they don’t get in. I would say it feels like highschool but wouldn’t know since I didn’t attend highschool personally. I skipped two years, earned my diploma, and went right into college and the first two years I did at home since I had a full time job at 14. At any rate I think I just need to focus on all the lovely ladies I am dying to see (and there are many) and not worry so much about the circus that I feel Blogher 12 will almost certainly be.

In other blogging news I went to a local blogger event this past weekend here in Columbus, Ohio for the new Nationwide Children’s Hospital. It was an amazing place. Much of it was designed by folks who also design children’s museums so it was kinda like Disneyland in many aspects. Beautiful! 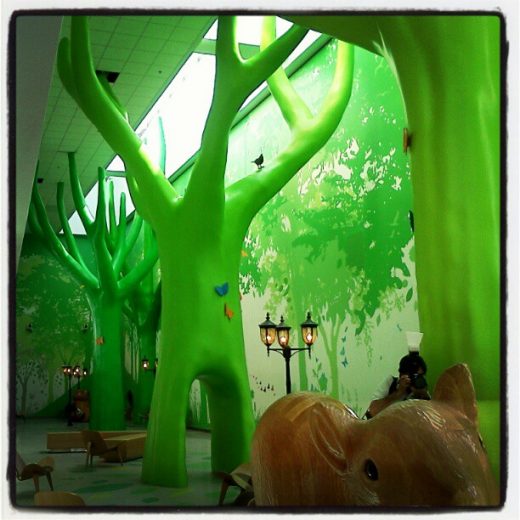 I hope my kids never have to go there but I also really respect this organization since they treated my oldest at 5 years old and they were the ones who finally diagnosed him with epilepsy. It was also refreshing to be able to actually have your sick child stay at the best hospital system in the state with the required specialists. In Arizona my son was hospitalized twice and BOTH times Phoenix Children’s was full and not able to take him.

I must also confess that I kinda love hospitals. Sounds weird, I know but I was pre-med before I got pregnant with my first and decided I needed to aim lower with my career goals. I used to read books like this, about interns and medical residencies, just for fun. I find it all fascinating and exciting. I was also impressed with how eco friendly they are. Recycling bins in the patient rooms, LED lights, LEED certified power station and research facilities. They are also a sugar free beverage facility which means you cannot buy sugary soda or juice in that hospital anywhere (even vending machines) and they have better choices for food too. In addition to their cafeteria where every single item has the nutritional info and allergy info (gluten, nuts, etc.) on large overhead screens there is also a whole foods chinese place. I think this is pretty awesome because the OSU heart hospital downtown actually has a McDonalds inside of it. Epic fail.

Anyway it was nice to tour the hospital, meet some local bloggers, and do a Q&A with some of their doctors, one of whom was an autism expert. We also got lunch and a bag of hospital branded swag… a reusable cup, mouse pad, band-aid dispenser, journal, etc. It was nice, practical stuff. You can see the Flickr photos of the event here. I am in a few of them. And yes, that is a car inside the hospital. It is for teens and young adults who need to learn or re-learn how to drive after being disabled in some way. So that was my week…

What I am Reading:

For fiction I read BitterBlue, the sequel to Graceling and the companion to Fire. Amazing! All three of these books should be on everyone’s must read list.

I also read Insurgent the sequel to Divergent. Very, very good book and series though the end confused me. I feel like it went right over my head so if anyone has read it and can explain the significance I would much appreciate it.

For non-fiction I read Plastic Free by my bloggy friend Beth. It is beyond awesome! It really makes you take a hard look at all the plastic in your life and what you can do to reduce that. This is one area I plan to concentrate on more in 2013 and this book will be a huge help.

I am also uber excited by the announcement that a new MaryJane Butters book is coming out about Glamping which is Glamour+Camping. I am the type who likes to eat lobster and crab legs by the campfire and sleep in a tent trailer so I totally get “Glamping”.

Have a great weekend!