↑
You are here: Home / Healthy Eating / What to Drink Instead of Soda 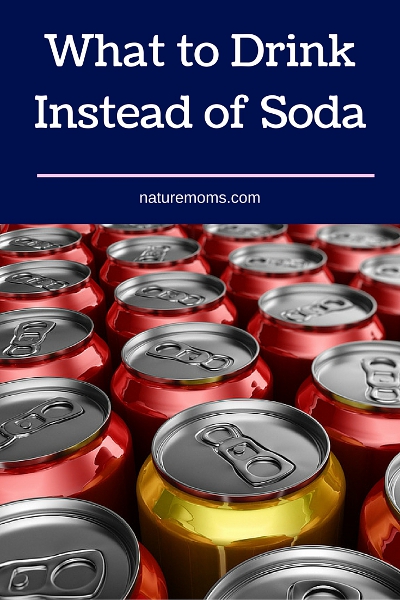 Soda is one those hot button topics for many. Health minded parents think of it as thorn in their side…something always there to tempt kids into drinking tons of sugar. Many people could care less and they happily consume it in mass quantities and cry foul whenever legislation arises to tax it or limit it. It is a hot topic because it is a hugely controversial product and hugely unhealthy.

Now this is not to say that my own kids never have soda. In fact they do. It is our rule that soda is not to be consumed at home but if we eat out (which is not very often) they can order soda. If we go to someone else’s home who has soda we require they drink a full of glass of water before they drink the soda and typically this means they cannot finish the soda, which is a-okay with me. For some reason it never occurred to me until JUST now that we could also do this at restaurants. Hello? New rule!

Why don’t I ban it completely? Well, I don’t want my kids to lose respect my words of wisdom when they inevitably see other kids all around them who are allowed to drink the sugary stuff. I don’t want them to think I am some hippy dippy overreacting mom and thus make the soda even more powerful in their minds. Whether or not  this is a good idea remains to be seen (letting them have ANY that is). I am hoping that they develop a keen eye for the dangers of soda and that they end up liking so many other beverage options they don’t need it later on in life. I also hope to turn out kids who can make wicked back of home brewed Kombucha!

I was encouraged recently to read an article about how soda makers are reporting lower revenues and how the production of high fructose corn syrup is declining. This is great news in my mind although this is also why the soda companies are now buying out companies that make healthier drinks, like my Zico coconut water I can no longer drink thanks to them being bought by GMO supporting Coke. Ugh! At any rate if soda profits are falling then people are getting wise to just how bad this stuff is. Another article came across my radar this morning about a 31 year old woman who died due to what her doctors call a Coke addiction. She was drinking 2 gallons of the stuff a day and even gave birth to a child who had no tooth enamel, thanks to the soda. Scary stuff!

The part that stuck out to me in that article was how her family feels she was addicted and had withdrawal symptoms whenever she tried to stop drinking it. I had a similar experience when I stopped drinking soda. It was 2-3 days of terrible flu like symptoms and headaches. That stuff really is addicting and I have no doubt that years from now it will be common knowledge that soda companies formulated products with that in mind.

So what you can drink instead of soda? Here are some of the things we drink. What do you drink?

Kombucha – Can make tons of different flavors by adding fruit/juice

Fizzy Juice – Use a soda stream and concentrated juice