↑
You are here: Home / Children / A Minimalist Approach to Toy Clutter 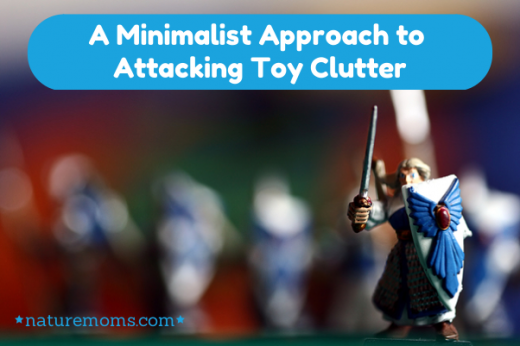 Toy clutter is a big problem in the typical American household. We live in a society of excess and amassing huge quantities of toys is just part of the lifestyle. Gone are the days when you got one toy for Christmas (ie that shiny red bicycle). Now kids can pick up a dozen or more new toys and gadgets during the holidays and the toy consumption really goes on all year long. I know well how easy it is to fall into the habit of excessive toy buying. I was raised with lots and lots of toys and so when I had my first child I thought that was what you did…shower your child with toys. My oldest child’s bedroom would get so messy that he would not be able to handle it himself. It required a parent (or two) to “gut it” frequently and make it livable again.

All of the this changed though with my second and third children. We decided to downsize our entire life so that my husband could get a different job, one that would mean we actually would see him on a daily basis. This came with a huge cut in pay but I was ready and willing to meet that challenge because I wanted our family to live more intentionally. I also wanted to stop the cycle of excessive spending and rampant consumerism. We moved from a 6000 square foot house to one that was 1000 square feet. We started living with a mind to minimalism and one of the first areas we tackled was toys.

Nowadays we have very few toys in the household and with the exception of Legos, none of them are new. If we buy toys we buy them used at thrift stores and yard sales. We also purge frequently (donating them) and allowing only so many toys. This means I almost never have to tell my kids to pick up their toys because they just don’t have that many. There were some pains adapting to this in the beginning, especially for the child who grew up with an excess of toys but my youngest two don’t know any other way.

This is the easiest and most sensible first step. I am sure your pocketbook will be eternally grateful too. Kids don’t need all those toys and in fact I suggest reading the book Simplicity Parenting. It was written by a therapist who recognized that many modern day kids have post traumatic stress disorders due to their their hectic schedules and overabundance of “stuff”. One statistic that was horrifying to read is that the average American child has around 150 toys. That is ridiculous!

In my home we buy new “things” for the kids for holidays and birthdays only. Now this is not to say that we can’t surprise them with something special just because but in general they only get toys or new possessions (except clothing) during special occasions. When we go to a store my kids know they will not be stopping in the toy isle and they will not be leaving with anything. I think it provides them with an understanding that we can go into stores and buy the things we need only.

One of the ways in which our children are influenced into consumerism and senseless buying and spending is via television commercials. You can avoid this by changing the way they watch TV or even going TV Free. We have opted to not allow our kids to watch regular TV and mainstream cartoon channels. Though we don’t tell them they can’t, we just set it up so they only have the options we endorse. We stream and/or rent content via Netflix, Redbox, or Amazon Prime. They get to watch shows they like without commercials so they are often unaware of the latest, greatest toys. We also have basic cable but almost never watch it directly. We DVR anything we want to watch from there and use the fast forward button!

Make five piles and label them as follows:

1. Toss: for toys which have been damaged, broken, missing or worn out
2. Keep: for toys still in use and well loved
3. Sell: for toys that were expensive and for which you feel that you will still be able to get something back from them by selling them.
4. Giveaway: this pile is meant for those toys which are still good but have lived their life and are no longer interesting for your children.
5. Save: for any toys you feel you should save for subsequent children.

Set aside one room as a toy-free zone

This room should be the first room you see when you come home or the room you spend the most time in to relax and unwind. You should help your children understand that this room is only for relaxation and not a room for toy clutter. If they bring a toy into this room then it also needs to leave at the end of that day or when they leave the room to spend time somewhere else.

I used to have a toy box in our main room (or family room) so that my kids would have easy access to some of their favorite toys and so they could be put away quicker and with less of a battle. Awhile back though I decided I just didn’t want to see any toys in the common areas of our home period and I got rid of it. Toys are not permitted anymore…they have to be kept upstairs in the child’s bedroom or actually in their hand being played with if they are in the common areas like the family room or kitchen. This is non negotiable.

When you go about limiting the selection of the toys and rotating them in and out of the play environment on a scheduled basis it reduces stress for the whole family. Moreover, it also keeps the children from becoming overwhelmed by all their options. Old toys become new again. You simply need to have a method to store the toys (out of sight) so that you can rotate them every couple of months without children getting into them.

We can conclude by saying that what children really want is us. They also want and need fun experiences. This is why it is necessary to spend some quality time together as a family and not buy a bunch of toys so that they can spend their time entertaining themselves. Enjoy them. One of the most remarkable gifts which you can give your children is the gift of your presence. When you go about looking for something to give them, keep this in mind.

Recommended Reading: Clutterfree with Kids: Change your thinking. Discover new habits. Free your home (Only $2.99 for the Kindle version!)