↑
You are here: Home / A Green Home / What Is Your Microwave Doing To Your Health? 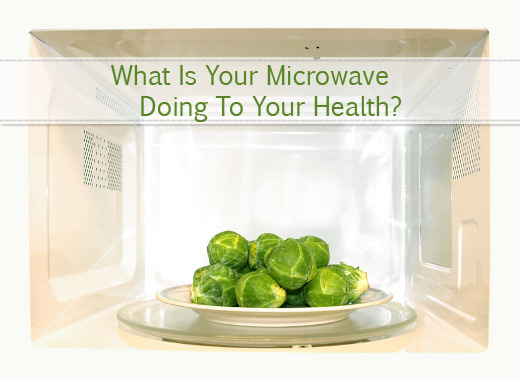 When we moved last year we finally said goodbye and good riddance to one popular appliance… the microwave. The old one stayed with the house and I knew that we would not be purchasing another. It was time to say goodbye.

We didn’t use our old one very much but the very presence of it meant that we did use it occasionally… say for melting butter or to heat up leftovers quickly. I didn’t want to use it, but it was hard to resist the convenience. It was just one of those things that required some cold turkey action I guess. Now, a year later, I wonder what the big deal is about a microwave. If we can’t eat it raw, or heat it or cook it on a stove top, then we don’t it eat it… end of story.

But why exactly did we want to get rid of our microwave? What is so bad about microwaving your food? Well, the very fact that you can heat food in mere seconds without the microwave being hot to the touch should tell us that microwaves heat our food in a very different way than a stove. Microwaving food is essentially irradiating our food.  According to Robert O. Becker M.D.’s and his book The Body Electric, it is unhealthy to even be in close proximity to a microwave. There is a lot of data out there to suggest that microwaves change the chemical make-up of our food, making it unrecognizable to our body as food, creating an immune response in the body, and possibly changing our food to something unfit or even dangerous for us to consume.

If all a microwave did was heat the food and not change the food, then why would a woman have died in a 1991 Oklahoma case after blood for a transfusion was heated in a microwave? The blood for transfusions was usually heated before procedures but not in a microwave. After receiving microwaved blood the patient, who was getting hip surgery, reacted to the blood and died on the table.

For years we have been told by experts not to microwave breast milk since it kills the beneficial elements found in it. We have also been told not to microwave formula, but the reason given is usually the chance that “hot spots” will burn the baby. I think it is because most experts know that microwaving the formula is rendering it lifeless and maybe even toxic. If even some of the research on the effects of microwaved food can be proved conclusively true then it is a travesty how many children have been raised drinking microwaved milk or formula. Could this be another reason, in an ever growing list of reasons, why kids are so unhealthy today?

In that same article (linked to above) it shows how a Swiss biologist and food scientist Dr. Hans Hertel studied the effects of microwaved food and found that the blood of people who ate microwaved foods showed a decrease in hemoglobin and cholesterol values, in the HDL (good cholesterol) versus LDL (bad cholesterol) ratio and in white blood cells, weakening the immune system, and an increase in leukocyte levels, which tends to indicate poisoning and cell damage—conditions ripening the body for degenerative diseases and/or cancer. On the cover of a magazine that published one of his studies there was a picture of the Grim Reaper holding a microwave oven in one of his hands.

Another research paper worth reading is by Lita Lee Ph.D (chemist, enzyme therapist, nutritionist, author and lecturer that has been in private practice since 1984). In this paper she discusses how microwaves are labeled as health hazards in Europe and other developed countries. They are even outlawed in some countries, such as the Soviet Union. It goes on to explain exactly how they work and why they are harmful.

You have probably also done some field work on your own that confirms these findings. Put a lovely dish of fresh food in the microwave and look at how it comes out… a lifeless, melty blob. Microwaved food is VERY unappealing because of the way it looks on the outside… it is just as unappealing on the inside though.

The data on microwave ovens shows that they change the chemical makeup of the food they cook and that those changes can and do lead to changes in our blood that can cause deterioration within our bodies. While there may be much we don’t know about microwaves the things we do know are sufficient enough for me to take an item that I rarely used and ensure it is an item that I never use. After one year without one, I wonder why it was I even thought that having one was necessary. The only area I need to address is the rare time when I might eat out… I need to make sure that any restaurant that I patronize hasn’t used a microwave to heat the food because there are some restaurants that I know of (Applebees for instance) that do.

How do you feel about microwaves? Do you use one? Is getting rid of it hard for you?