↑
You are here: Home / Beauty / Threading – A Greener, Healthier Alternative to Eyebrow Waxing 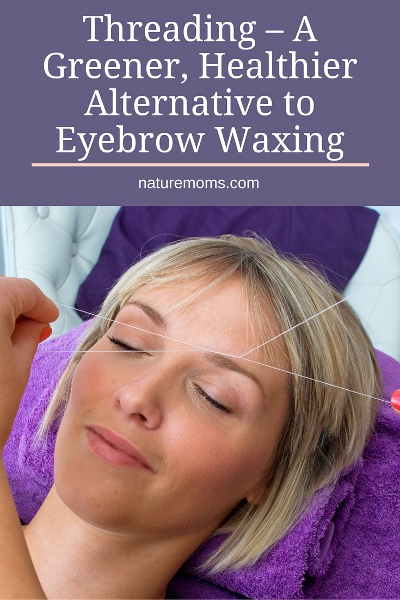 A couple months ago one of my Facebook friends was discussing how she was going to make a “threading” appointment for her eyebrows, which was supposed to be healthier than using a chemical wax. When I saw mention of this I was instantly curious and did a Google search to find out what this threading stuff was. After reading up I was instantly attracted to the concept and wondered if any place in my area offered such a service.

Threading is actually an ancient method of hair removal that originated in the east (Arab, Indian, and Persian countries). The last couple years or so it has really gained popularity here in the west. Not sure where in the heck I was all this time but I am on the boat now! Basically hair is removed at the follicle level with a thin, twisted piece of cotton thread. The practitioner holds the thread in a cat’s cradle position (anyone remember that string game from when they were kids?), settles it over a section of hair and then twists until hair is pulled out by the root.

While perusing the lovely Easton mall near my home I saw a salon called Exquisite Threading and I decided to check this out for myself. They have locations nationwide. Up until now I have been mostly been waxing. Tweezing is just not enjoyable for me because I have big black caterpillars above my eyes… they are quite thick and bushy. So about 3 or 4 times a year I get them waxed in a salon and “try” to tweeze in between sessions to keep them maintained. The drawback to this is that the wax has chemicals in it and I have yet to find a place that does sugaring or a more natural eyebrow waxing. It also creates a lot of waste I am sure with leftover wax and all the muslin strips that need to be tossed away. Threading seems to be a much healthier and greener way to go. No chemicals, no waste beyond a bit of compostable cotton string.

For my first appointment I settled in the chair and the gorgeous Indian practitioner asked if I wanted my eyebrows on the thin or thick side. I opted to play it safe and go for thick. The last time I had them waxed the practitioner made them so thin it looked like I drew them on with a pencil. I really should have looked at her own eyebrows and asked for another practitioner but I didn’t want to be rude and my eyebrows paid the price. I was VERY satisfied with my threading experience though. It was lightning fast, which surprised me, and my eyebrows look very satisfactory. It did not tickle by any means so I would say it hurts a bit more than waxing but my eyes were not red and puffy for more than 30 minutes though. Waxing usually makes my eyebrow area inflamed for hours and most times I bleed as well. Threading seemed to make for quick and easy healing. Perhaps it was the optional witch hazel they apply afterwards that helped. The only drawback was that I was rubbing my eyes for a good 30 minutes to get stray hairs out of them but that little annoyance will not keep me from future threading sessions. I am sold.

Have you tried threading?