↑
You are here: Home / Health & Healing / Earthing – Why the Disconnect From Our Planet is Hurting Us, Literally

Illnesses do not come upon us out of the blue. They are developed from small daily sins against Nature. When enough sins have accumulated, illness will suddenly appear. – Hippocrates

A few weeks back I wrote about the winter blues and how the seasons affect our moods and energy levels. At the time I couldn’t help but think about how so much of the solution comes from simply removing ourselves from the insulation of our homes and getting outside more. A disconnect from our planet can be making us moody, depressed, and unhealthy. We nature lovers talk a good game about how important it is to rediscover nature but most people cannot be bothered which what they perceive as “nominal” benefits. Being cooped us is making them moody and tired? Pft! They would rather get their energy boost from a can of Red Bull because they are simply too busy to go outside and commune with Mother Nature.

It got me thinking about how many health issues are directly related to a lack of connection to nature. I don’t mean something like the disconnect with our food chain, which makes us buy processed foods, which leads us to consume sugary crap and go down diabetes row. I was looking for more glaring instances… ala removing my wiggling toes from the loose soil of my garden and putting on shoes leads to this. Having a roof over our heads instead of the moon results in that. This curiosity led me to some further research, which then led me to a couple different books I hope to share here. The first is an amazing book called Earthing: The Most Important Health Discovery Ever?

This book essentially talks about the natural energy in our body and the natural energy that runs throughout our planet. More and more scientists from varied fields… geophysics, biophysics, electrophysiology, electrical engineering, medicine… are seeing how the electrical energy that emanates from the earth controls our own bodily frequencies. The book likens the earth’s control of our bodily energy to the way a conductor controls the cadence of an orchestra. It ensures a balanced, rhythmic flow. What happens to that flow when we remove ourselves from that energy by wearing insulated shoes and we spend all our time in buildings and in beds that disconnect us from the earth’s surface? The book likens this to a light bulb with a loose connection. We flicker, we shine weakly, our light may go out.

This book was everything I hoped to find and more. As I read it I couldn’t help but think about how many people have no concept of our electrical roots. Well, maybe they give it a little thought if they saw The Matrix movies. If you haven’t seen the movies, basically humans in the future are used as batteries for heat and electricity by sentient machines. Movie aside, it shows how we as humans are bioelectric in nature. The earth’s subtle ground currents and electrical potential rises and falls with the position of the sun. The intensity is more positive (energetic) during the day and less positive in the evening. The earth’s energy helps to regulate our own bodily energy. Our sleep patterns, our hormones, our health… all of it, is tied to this flow and regulation of energy. Without it, we are a flickering light bulb. Earlier humans instinctively knew this, even if they didn’t know what electricity was. Just think about all the ancient peoples, tribes, clans etc. that worshipped nature and viewed the earth as sacred. They knew it has a life force or an energy that they could tap into. They knew that they needed to maintain a connection with it. Earth worship is probably the oldest “religion” there is in fact. They knew something that we seem to have forgotten along the way or that we have been programmed to ignore.

The premise of this book is that a connection to the earth remedies an electrical instability and an electron deficiency we are not aware we have. Connecting to the earth is also not accomplished as many commonly think, by hiking, camping, and gardening to get closer to nature. Earthing is a term that actually means grounding. Grounding defined: to place on or cause to touch the ground. When our ancestors slept on the ground or walked barefoot, they were grounded, touching the earth. Earthing then means that we make it a practice to sit on the ground (not on a plastic chair), walk barefoot through dirt and grass, and also use conductive bed sheets and floor pads in our house. I had never even heard of such things before and now I totally want them!

The bed sheets and mats are linked by a wire to the grounding rod outside/under your home. I assume you must have grounded circuits for this to work though. The first place we moved into here in Ohio was so old that it did not have grounded circuits. Anyway, you ground yourself the same way you ground an appliance. Electricity always seeks the ground/earth (coincidence?) and with appliances you want to ground them to prevent yourself from getting shocked or electrocuted.. ala the electricity will go to the ground rather than go through you. Grounding yourself by earthing protects your bioelectrical circuitry, free electrons and stabilizing energy signals are transferred to your body, and it recharges and balances you. The sheets are obviously used to ground you to the earth while in your bed, so you don’t have to go sleep outside. The mats are for you to rest your feet on while you watch TV or for your feet or arms/hands while sitting at a desk/computer. You literally plug yourself into the healing powers of the earth.

Okay, so I just barely scratched the surface of all the wonderful info in this book. It has many, many real life examples of people who have healed themselves of various things with earthing… pain, inflammation and inflammatory disease, insomnia, low energy, stress, headaches, hormonal issues, and more. It discusses inflammation as a starting point for many diseases and also the well researched hypothesis that much of the disease in developed countries is due to ravaged immune systems. I completely agree and would have numerous reasons to cite for our poor immunity, vaccines, poor diet, no exercise, lack of sleep, etc but I would also add a lack of physical contact to the earth after reading this book. I envision the human race as having evolved with an umbilical cord that attaches us to our planet and we are carelessly severing that cord with our modern lifestyle. Sever that cord that tethers us to our planet and you are cut off from that nourishment and healing energy.

It was fascinating to read the personal story of one of the authors, Clinton Ober. He was the owner of a huge cable TV operation and worked for years in the installation of these systems. Working with electricity was a huge part of his life until he got very sick and he reevaluated his life and priorities. A sudden thought he had in Sedona about how much of the earth’s energy people wearing rubber shoes were missing lead him to a variety of personal experiments. He actually walked around with a voltmeter to see how his body was being affected by electrical energy in his home. When he would get close to a lamp or some other appliance, his EMF voltage would go up. At one point, while lying in bed he registered the highest EMF levels yet and he decided it must be due to all the wiring in the wall that this bed was up against. He immediately deduced that the electric fields were preventing him from getting sufficient sleep, which at this point was elusive unless he medicated first. With that knowledge he ran a ground wire out to a stake in his yard and fastened it to his bed with a metallic duct tape grid. He put the voltmeter on his chest and it zeroed out. The next thing he knew it was morning. He had fallen asleep with the voltmeter on his chest and this “event” was reproduced every night thereafter.

From there he asked friends if he could ground their beds and he was getting great reports, including one friend who was convinced that his arthritis pain was receding. He started remembering little tidbits from his childhood near a Native American reservation in Montana. The grandfather who dug a pit in the ground for his granddaughter to sleep in when she had a fever. The admonishment from a mother to her children that shoes will make you sick. He knew he was on to something and the book Earthing is the culmination of years of research spurred from a chance thought and a few experiments.

Also discussed is research into shoes and how they have been devastating for human health as well as the benefits animals get from being pastured or allowed to roam wild as opposed to confined in barns, coops, and outbuildings. Also the results of a study done on grounding as it relates to cortisol levels. Cortisol is known as the stress hormone and many studies have also linked it to weight gain issues. Grounding, as demonstrated in the study, returned Cortisol levels to a natural, normal rhythm. Ironically this study was initiated by a doctor who read about Earthing via a scientific journal and wanted to prove it was not possible to benefit from such a practice. He could not do so. Also studied was the impact of Earthing on inflammation and by extension heart disease as well as our ability to heal from cuts and wounds faster by Earthing.

I could go on much, much longer but this post has gotten large enough I think. I highly recommend Earthing for a great read. Even if you don’t end up trying it, I think the book has lots of food for thought and lots of great research into how the disconnect from our planet is hurting us. I hope to post more in the future as I try it myself. 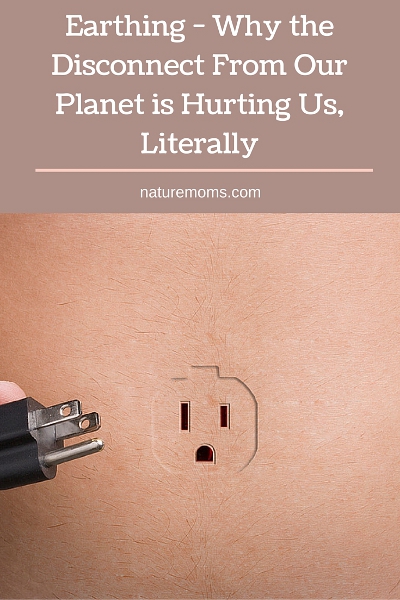