↑
You are here: Home / Environment / Paleo For the Planet – Why Carnivores Can Have a Positive Impact 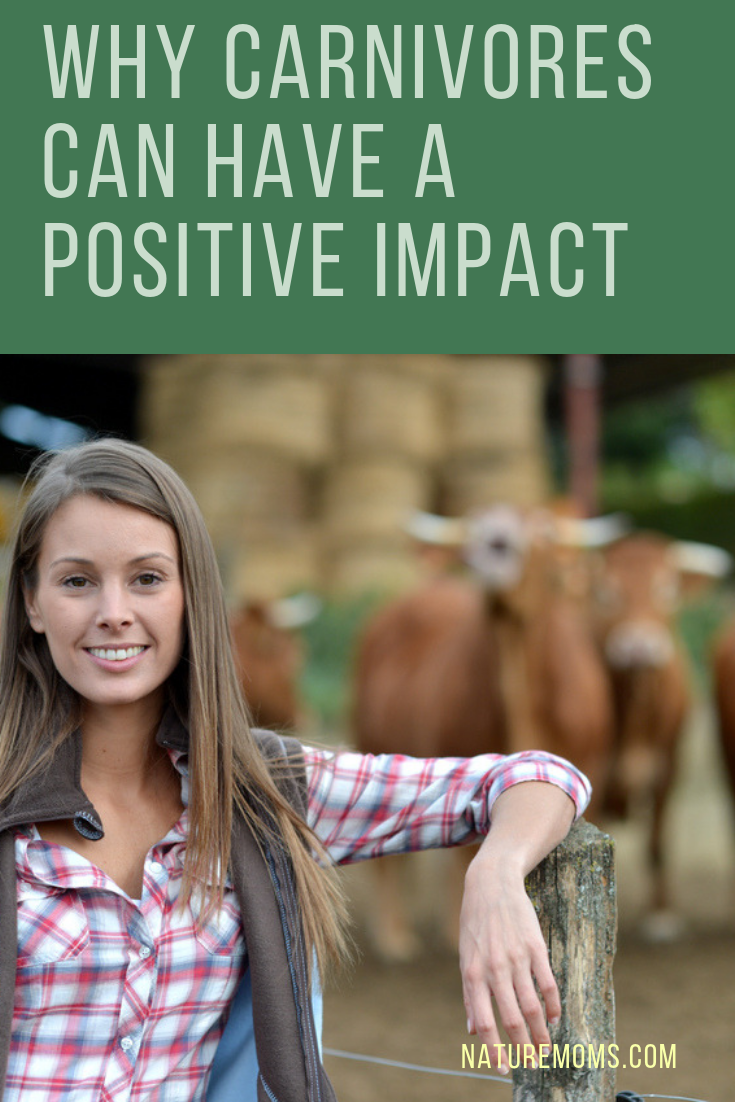 A few months back I wrote a post about going paleofor health. I mostly wrote it as a visceral response to a blog post I read that tried to debunk the paleo diet as unhealthy and elitist. I think I did a pretty good job trouncing all of the reasons they claimed the paleo diet was so gosh darn awful. One of their “issues” with paleo though went unanswered by me though. I thought I would write a follow up post within a few days but just never got around it. The article, from way back when, claimed that going paleo was bad for the planet because meat consumption in general is not good for the planet.

This idea is nothing new. We hear it all the time from vegetarians, vegans, and the part timers who think that a Meatless Monday will help with the planetary impact of meat as a food choice. We hear it all the time because it is rooted in truth. Meat consumption can and often does have a very negative impact on our planet. This is all very true. Though we must also insert a big BUT here if we are being genuine and honest. The keyword is that meat consumption CAN have a negative impact…this is not always the case and there are many conscious meat eaters out there who are creating change and eating with minimal impact. It can be done and I think most paleo and primal diet enthusiasts fit that description, or they are attempting to. Paleo, when done right right, can be a huge boon to human health and it can be done sustainably and without damaging our planet further. How so? Below I outline some of the reasons why meat eating doesn’t have to be unstainable…

Factory Farms are Unsustainable – Not Paleo – The thing you have to understand is that when anti-meat crusaders start talking about the negative impact of meat production, 99.9% of the time they are referring to factory farming. They are talking about the huge lots with hundreds and thousands of cows, pigs, and chickens that are kept in dirty cages, fed unhealthy and unnatural foods, and overwhelm the area with massive amounts of toxic waste. I do not argue that these systems are hugely problematic and harmful to our planet. This is NOT the type of food that modern day cavemen want to eat though.

Paleo enthusiasts support small, local farms that pasture their animals and allow them to eat the healthy and natural foods that they are designed to eat. Most of the time these farms are diverse and they do more than just produce cows or chickens for meat. They might also grow fruits and veggies, keep bees, and utilize the waste that their animals produce to feed and nourish their plant based crops. An example of a system like this can be found in the Polyface farm owned and run by Joel Salatin. We paleo eaters don’t like factory farmed, unsustainable meat any more than the militant vegans do and as much as we possibly can, we avoid it at all costs. So when the anti-meat parade starts talking about how meat is unsustainable they are talking about factory farming and when you consider the meat sources that paleo eaters endorse and support than you know you are comparing apples and oranges. 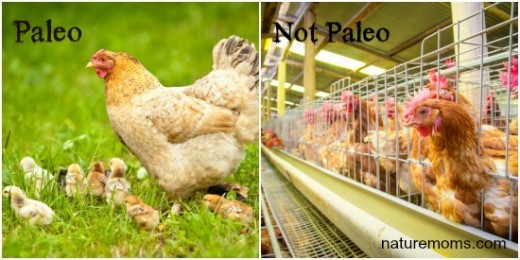 Plant Based Crops Can Be Just As Harmful – Where I live in Ohio I need only drive a few minutes to be completely surrounded by corn, soy, and wheat fields. Most if not all of it probably GMO. Monocrops such as this are devastating to the planet. Growing the same thing over and over means pests and bugs are rampant, which means stronger and stronger chemical pesticides and herbicides must be used to create successful crops. These chemicals go down into our groundwater to slowly poison us and they harm our bee populations.

Now a HUGE part of this is tied to factory farmed meat (I admit) because these crops are grown for them to eat. This is another reason why paleo eaters don’t support factory farming! The animals are fed unhealthy foods that make them diseased and sickly. Cows are meant to eat grass, not corn. BUT these huge monocrops are not ONLY for factory farmed animals…they are also for human food. The kind of food that vegans and vegetarians eat. You see it is much cheaper and less labor intensive to grow one crop. The soil however is depleted because one thing is grown over and over with no biodiversity. This means that massive amounts of chemical fertilizer must be used to even get the crops to grow. Add to this the pesticides and herbicides and you have a yummy chemical cocktail on the your tomatoes, salad greens, strawberries, spinach, grains (for flour, bread, processed foods), soy (for soy protein), beans, lentils, and much more.

For more information on why a plant based diet is FAR more unsustainable than we are typically lead to believe I highly recommend reading The Vegetarian Myth. It exposes the destructive history of plant based agriculture  – causing the devastation of prairies and forests, driving countless species extinct, altering the climate, and destroying the topsoil.

No Junk Food Crops – Modern day cavemen don’t support the junk food crops like soy, corn (for HFCS), beans, and grains because we generally don’t eat that stuff. If someday every person on the planet went paleo… which let’s face it, is a bogus argument… imagine how much land we would have to tinker with if we stopped growing all those nutritionally devoid junk food crops. When you argue against paleo foods as a sustainable option, you are really arguing against REAL FOOD being a being a sustainable option. If real food isn’t sustainable than we do indeed have very big problems.

Paleos Supports Local Food Economies – Paleo folks are excellent supporters of small local farmers and food producers and as such as also great supporters of their local food economies. It is because they want pastured, ethically raised meat that they seek out local producers. It is cheaper to get these items locally and they like to get to know the farmer producing their food so that they know exactly how it was raised/grown. They are tuned in to the local foods scene around them and typically this is where they end up sourcing the majority of their food…from local producers who grow things with an eye on sustainability, health, and biodiversity. They basically have to. It is a very rare grocer that offers things like grassfed beef and free range chicken and eggs from chickens not fed soy. By necessity we paleos become local consumers who eat in season.

Paleos Eat Far More Than Meat – For some reason the paleo/primal diets become synomymous with carnivores…like we sit around and gnaw on raw steak all day. There are plenty of meals though where meat does not even make an appearance on my plate. We eat a variety of foods, only some of which are animal products. If anything my range of veggies and greens expanded when I went paleo. I eat more fruits and veggies (variety and quantity) after going paleo, than I ever did as a vegetarian.

Paleos Like To Grow Their Own – Okay this might be an over generalization but in my experience, paleo folks like to take charge of some aspect of producing their own food, even on a small scale. Perhaps it is because they have such rockin relationships with their local farmers and they want to try it themselves. Maybe costs motivates them. I don’t know, but most of the paleo/primal folks I know do something… whether it be raising animals for food or vegetable gardening in their own home or through a community garden.

Paleos Are Hunter Gatherers – This point ties in closely to the one I just highlighted. One more way in which we can take charge of our food and not rely on big agribusiness is to learn about wild food foraging and hunting. It is not unusual for paleo dieters to include deer, rabbit, squirrel, and other wild caught  meats and fish to their diet. Some of the busiest booths at my local farmer’s market are the small scale sellers and hunters who sell these exact items. You cannot tell me that deer, rabbit, and squirrel are not a sustainable way to add more meat to the diet.

Paleo Are Very Conscious Eaters – Just as ethical vegans are more conscious of their impact on animals when they eat, paleos are also very conscious about their choices and the impact. It just goes with the territory. When we start out on this journey we look into why grains are bad for our health and soon it becomes clear that growing grains is also bad for the planet. When we start to eschew factory farmed meat we learn a ton about how meat is produced, how animals are treated, how healthy they are, and the impact they have on health and planet. When you learn all about these issues you cannot help but WANT to make the best choice on all fronts. You fall down a rabbit hole into a whole new world and it changes you…for the better.

In short these are just some of the reasons why the argument that paleo/primal eating is bad for the planet… are just plain running out of gas. What do you think?