↑
You are here: Home / A Green Home / How to Avoid the Poison in Your Pantry 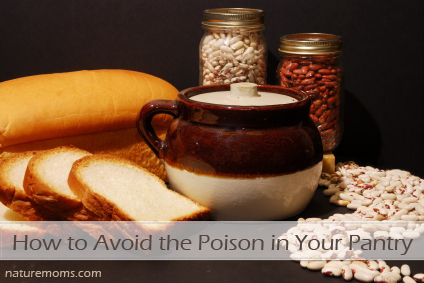 Until recently, when I started eating less raw and cooking more in an attempt to win over my husband and ease us all into a more meatless existence I hadn’t used canned food in quite some time. I understood that there were issues with canned foods but since I didn’t eat them I didn’t blog about it. But now I seem to be on a Mexican, South American, and Caribbean cooking kick which uses a lot of beans and I have resorted to using canned beans on occasion. With all that I have read recently though I decided to buy a bean crock and force myself to only use dried beans until canned food is just a bit safer and healthier.

So what is wrong with canned food?

BPA – The major issue is BPA or Bisphenol A. It is the endocrine disruptor that I have mentioned oodles of times on this blog that is found in plastics, water bottle liners, and canned goods, among other things. We may have been quick to take that BPA leaching baby bottle or sippy cup out of Juniors hand but perhaps we didn’t think to look in their green beans. BPA is making its way into our food. Consumer Reports and the Environmental Working Group have both studied the issue and found BPA in many of the canned products they tested, including infant formula, vegetables, soda and soup. And we are what we eat. BPA is present in detectable levels in over 90% of Americans’ bodies and groups are many are trying to send a message to the powers that be, that poisoning us, just isn’t cool.

Salt – Canned goods are outrageously high in sodium often times so look for low sodium or salt free brands. Also make sure to put beans in a colander and rinse really well before cooking. Be weary of canned soups since they can contain a third of the recommended amount of sodium for the day just in that one can. Try no salt versions and just get creative with spices and herbs.

Be Fish Aware – If you like canned fish, and I say that with a twinge of longing for canned Alaskan Wild Salmon on crackers… gulp – make sure to get fish stored in water rather than oil. And make sure to buy WILD caught fish since they typically have less contaminants than farmed fish.

Bean Pots! – These are made of clay or ceramic and where very popular decades ago in making beans. You can cook the way your ancestors did! You just put your beans in the pot with some herbs and spices and put it in the oven. The pot keeps the beans from burning and creates wonderfully flavored beans. You can soak the beans in the pot the night before and after rinsing just return them to the pot for cooking. Older pots should be put in a cold oven to get gradually hot rather than putting them in an already hot oven, as they may break.

The idea for crock pots likely came from bean pots but I still think the latter has a place in the kitchen because unless I am making chili or some sort of bean stew I need something smaller. Bean pots are great for baking black beans that may end up in burritos for dinner or under a fried egg for breakfast.

You can find new ones on Amazon and old ones on Ebay.

How do you feel about eating from a can? What do you do to make slow cooked foods just as convenient?