↑
You are here: Home / A Green Home / Keeping Cool in the Kitchen 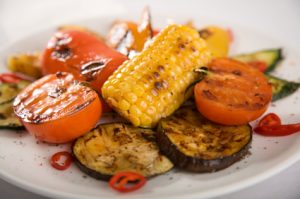 Cooks know that as the temperatures outside increases, the desire to cook decreases. It has already hit me full force… I don’t want to heat the kitchen by using my oven at all. And it isn’t due to lack of wanting to cook I just have the need to keep our home as cool as possible. We don’t run our air conditioner willy nilly because we don’t want to be energy hogs.. or spend extra money on energy bills. This is why baking is done mostly in the winter months and cool dishes are served during the summer. Who wants to heat their house up with the oven only to have to pay higher bills to cool it back down again? Not me!

Keeping cool in the kitchen doesn’t automatically mean eating a cold sandwich and watermelon every day… although that’s cool if you want to. We have such a wide variety of cooking appliances to choose from though, we can serve wonderful meals for our families without heating up our homes. Here are just a few of the gadgets you can choose from.

Crockpot – They aren’t just for soups and stews.. although those are so easy why not? Slow cookers or crockpots are wonderful for recipes which typically take a long time to prepare. You can cook anything from lasagna to bake potatoes in a crockpot. I personally like to use up our local produce by throwing them in a crockpot with some beans. Sometimes I have some pretty wild creations but they are all yum. Slow cooked goodness without heating the house and you can keep it green and safe by using a clay crockpot. I have a VitaClay and LOVE it.

If meatless meals are your thing but you are not a pro with veg based slow cooker recipes try: Gourmet Vegetarian Slow Cooker: Simple and Sophisticated Meals from Around the World. Going meatless saves money too!

Microwave – If getting in and out of the kitchen quickly is important to you, there’s always the microwave. I personally don’t use one or own one because I think their safety is in question. But for those that like them you can cook nearly anything in a microwave in much less time than conventional cooking.

Wok – Oriental cooking is prepared at high temperatures in the wok but the foods cook quickly. If you don’t have a wok, you can make similar meals using a normal skillet. Just toss some veggies and sprouts in there and mix with some Asian sauce and you are good to go.

Pressure Cooker – The pressure cooker was once a staple in every country kitchen. They aren’t used quite as often any longer but they can still be used to cook a meal in less time, and therefore less heat, than other methods. A meal that might cook 4-5 hours in your dutch oven might take only an 1 hour in a pressure cooker.

Another way you can keep the kitchen cool this summer is to begin preparing meals earlier in the day. Plan the major part of your cooking early in the day while it is still cool. Once the cooked items are prepared, you can allow them to cool and place them in the refrigerator to add other items to when it’s time to get the meal on the table.

Offer your family plenty of cold foods when the temperatures soar. Cold fruit salads, tossed green salads, green smoothies, vegetable trays and homemade ice cream are sure to keep the kitchen and your family cool when it is hot outside. During the summer months my hubby and I will often take the kids and go to our local artisan ice cream shop for our evening “meal”. Rhubarb and Lime Cardamom Yogurt for dinner… heck yes!

Finally, if you want to keep your kitchen cool but aren’t afraid of a little heat, strike a match and get to grilling! You don’t have to stand in front of the grill while the food is cooking and the taste will be out of this world. Grill some veggie kabobs, corn on the cob, and Portabella mushrooms. Best of all, you will see keeping cool in the kitchen when it is hot outside is not only possible, it can also be delicious!