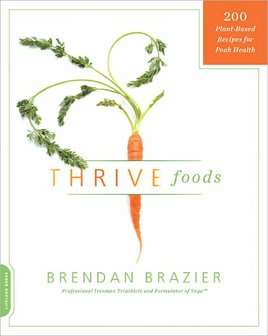 If you have ever embraced a plant based or raw foods diet then you have likely heard of Brendan Brazier.  He is an Ironman Triathlete who also happens to be vegan. I have read about him in various raw foods books since he is quite the fan of raw foods but mostly I knew of him from his product Vega, which I have used in smoothies. Even if you are not raw it is beneficial IMO to look to raw supplement powders because they always tend to be made from whole, organic, healthy foods that are as close to their natural state as you can get. Despite being a fan of his product and admiring his achievements I never picked up any of his books. I guess I figured they were geared towards athletes and that did not interest me much. But after reading Thrive Foods I am thinking I should reserve some of his other books at my local library because this book at least, was very relevant to my life and to anyone concerned with healthy foods I suspect.

The concept behind it is very near and dear to my heart since I call myself a nourished vegetarian. That primarily means that I subscribe to WAPF ideas while maintaining a vegetarian diet. More specifically it means I try to eat a nutrient dense veggie diet. Thrive Foods is one of the best books I have read though that explains exactly what that means.

It was Brazier’s search for foods that would help him recover fast and make the greatest gains in his athletic training that lead him to the ideas in this book. He figured that if he wanted to keep improving his body and performance then he needed to concentrate on the regeneration process our bodies go through after we exercise. How well and how fast we regenerate depends on our cells – the biological building blocks. If our cells do not have everything they need to function they experience what he calls nutritional stress. At first Brazier did what most athletes do… consume mass quantities of food thereby consuming mass quantities of nutrients. When he didn’t get his desired results he decided to analyze his food choices more carefully and realized that being fed is not the same as being nourished.

He discovered that macronutrients is what he needed to be looking for. Foods that had the most bang for their buck or the most maronutrutrients per calorie, ie nutrient density. What amazed me was the idea that is our body’s search for missing nutrients is what causes us to feel hungry and not a need for more fuel (calories). I always thought  that when we felt hunger pangs it is was calories to keep the home fires burning that we needed. But after reading this book it was a light bulb moment for me because true enough if I eat a big handful of pretzels/crackers I will be hungry literally 5 minutes later. If I eat a banana though, I am satiated for awhile, even if it had less calories in it. It is in fact nutrients our body is asking for and here I thought my ravenous hunger of late meant I was not eating enough calories to support my increased exercise and weight lifting activities. For the past week or so I have been very mindful of nutrient density when choosing foods and have experienced almost no hunger even though I ate less calories than previous weeks. Whether that will mean more muscle remains to be seen but I am pretty convinced.

Where this book differs from WAPF ideas on nourishing foods is obviously the fact that it encourages plant based foods above animal products. While it is true that animal products may actually be more nutrient dense there are still rampant problems with them. Brazier goes into a step by step comparison of how efficient it is to eat animals versus eating select plants and when you consider all the resources used to grow feed crops and raise animals it is simply more efficient and less of a strain on our planet to go with plant based foods, even when considering shipping of more exotic varieties. The book even addresses grass fed and pastured animal products and does not dispute that they are favorable to other animal products for a variety of reasons. But he makes a convincing arguement for why these types of products could never be available to the whole planet. There simply would not be enough to feed everyone and that makes it unsustainable in the long run. I read the chapters that discuss this with great interest and I have read opposing ideas as well (ala The Vegetarian Myth) and Brazier definitely makes the most compelling and researched case.

The second half of his book goes through a variety of foods, page by page, highlighting why they are nutrient dense, healthy food choices. Then it concludes with 200 recipes. Many of the recipes came from celebrated chefs who specialize in plant based cuisine and this was done so we would get an amazing array of tried and true dishes that taste good. I plan on making many of them myself but I started with the Parsnip Oven Fries. I wanted an after school snack for my kids and this french fry look alike hit the spot. They cooked up nice and crispy but a bit too dark and that was my fault for gabbing on the phone while they were baking. Served them up with some catsup and the kids thought they were regular old fries (which excited them because I never make fries) with just a bit of an “off” taste. Plus they were full of healthy fats via coconut oil. 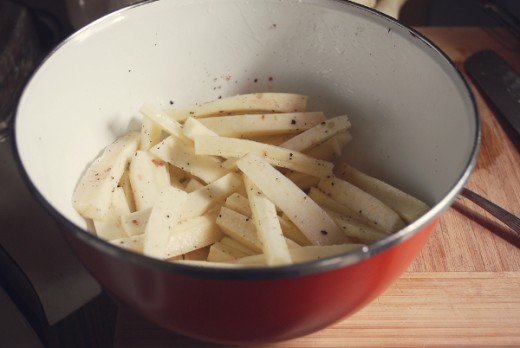 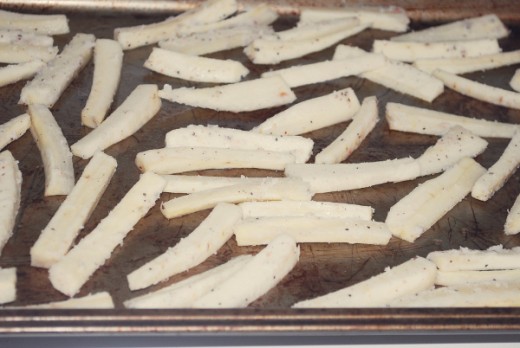 Will be trying some of the other recipes soon. I already see improvement in energy levels since reading Thrive Foods. It just makes you all that more aware of the nutrient density of the foods you are choosing and when I am aware I make better choices and get more nutrition out of my food overall. At the very least it has spurred me into eating more fresh fruit throughout the day, which has done wonders for the skin. LOVE the title too… it is about being nourished instead of just fed and it is about thriving instead of just getting by.